Last month, I took Aden to London for a week with my friend, MaryEllen, and her son, Pat.  It was a terrific trip, but as I posted a few weeks ago, the boys will remember the funny moments probably more than the tourist spots.

Checking out Big Ben and Parliament buildings in Westminster.

There is so much to do and see in London, we had to try to force some culture down the throats of those little sports nuts! Without kids in tow, we probably could have jammed 3-4 sights into each day, but with kids you must pace yourself and keep expectations low or you’re doomed. We kept it to about 2 major activities per day, which worked well.

London is one of the easiest cities to navigate. There is no language barrier, the subway and bus systems are amazing, and they basically spoon feed you information. To ride the Underground, you will need to purchase an Oyster card and add money to it in machines at the station.

Waiting for the tube in the ultra clean underground

The streets are well-marked, and every tourist attraction and tube stop has a plethora of helpful signs (like MIND THE GAP.) 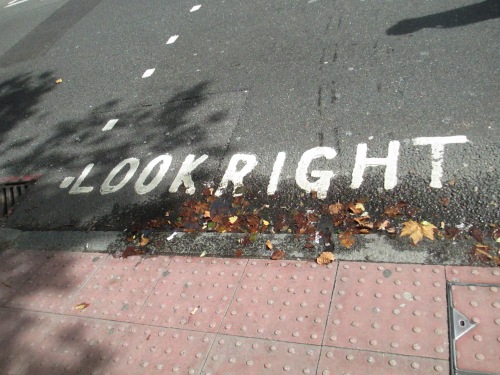 Those thoughtful English don’t want you to step off the curb and get squashed since they drive on the other side of the road.

On our first day, we took the Underground to Westminster and walked around. As soon as you exit the tube station, you’re standing in front of Big Ben, and the Parliament buildings are in the next few blocks. Westminster Abbey is also very close. We wanted to look inside and maybe even get a tour but there was a long line to get in and we feared the boys would wilt if we started the day waiting on line to see a church.

Instead, we walked a few blocks to the Churchill War Rooms. This was an easier sell because — although the rooms open up to an extensive museum on former British Prime Minister Winston Churchill’s life — the word “museum” is absent and therefore made the activity much more palatable.

When you enter the museum, you go underground to walk through the actual bunker of rooms Churchill and his men used during World War II, sometimes not emerging for weeks at a time.

There’s a situation room decorated with maps, sleeping quarters and a kitchen, all preserved to look exactly as it had in the 1940’s.

Each number you dialed on this period phone started a recording of a person who knew Churhcill commenting on his personality and leadership skills. I had to help Aden dial!

The interactive museum is very kid-friendly and full of memorabilia and historical exhibits. You don’t have to be a war buff to be fascinated by Churchill’s life, and we wandered around the place for at least two hours without much complaint from the peanut gallery.

The Eye is in the background

Now we were feeling ambitious so we crossed the Westminster Bridge to the London Eye. The giant, slow-moving ferris wheel is a total tourist trap but one of the highlights of the vacation for all of us.

It’s fun to be up so high for such a long time, and you can see the layout of the city from every angle, which made explaining our locations easier for the rest of the trip.

People on the next car brought snacks and champagne and looked like they were on a party ride (note to self for next time!) 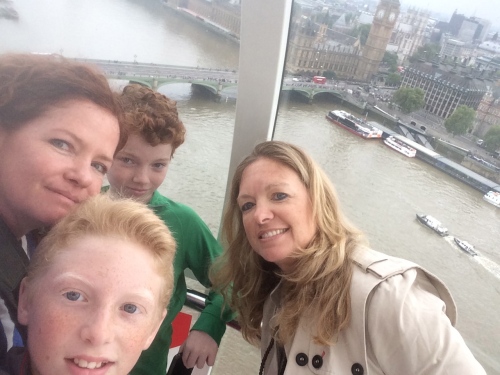 We didn’t go selfie crazy but some shots were a must!

When you buy your ticket for the Eye there are several other attractions you can combine with it to get more for your money. There’s Madame Toussoud’s Wax Museum (we skipped because we have in NYC)  and a London Dungeon tour that is supposed to scare the crap out of you– no thanks– so we chose to add the London Aquarium.

Aden loved the sharks swimming below our feet….

…and the touch tank.

Aden is an animal-lover and expert so we’ve visited zoos and aquariums in many cities. I’d say the aquarium in London has a lot to offer in variety, but it’s not a standout. It’s located near the Eye and several other tourist spots and probably great for little kids, but you could definitely skip it if you’re not into fish. 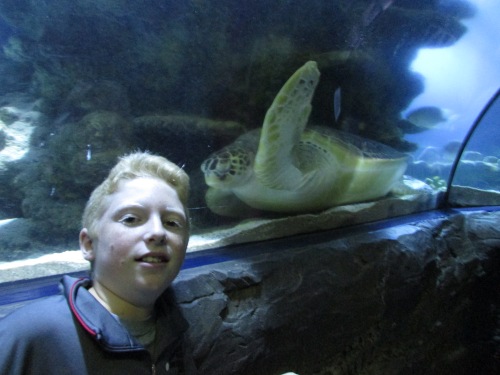 Was this sea turtle waving hello?!

On Day 2 we headed for the Tower of London— a must see.  It’s an original  stone castle/village that dates back to the 11th century and has been used as a royal palace, a fortress, a vault for the crown jewels, a zoo, and a prison. Now it’s a historical landmark where you can learn about England’s often dark and bloody history. 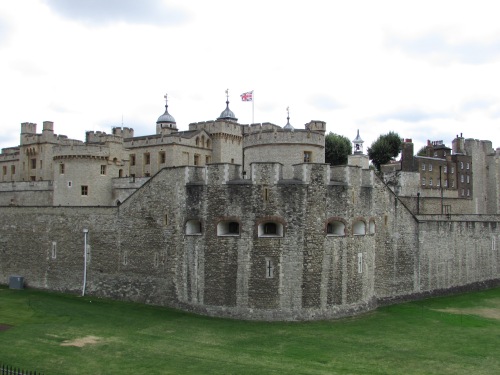 I highly recommend you take a tour given by the Yoeman Warders — an extremely elite crew of guards that are presently serving at her Majesty’s service.

They provide all the history, gossip and literally gory details of English royalty and culture as they take you through some of the main buildings.

The Yeoman telling us about the Bloody Tower (left) where many executions took place and two young princes were believed to have been murdered.

MaryEllen and I found our guide informative and funny, and the history lesson fascinating. The boys thought there was too much standing and found the tour a snore. But it’s worth persevering!

After the hour-long tour, we visited the Crown Jewels exhibit. Seeing millions of dollars of blinged out crowns, scepters and jewelry was cool, even for boys. Unfortunately, you can’t take photos inside, but I bought post cards to show Wilson in hopes he’d be inspired.

You could easily spend a whole day at the Tower of London — there are many buildings and exhibits to wander through….

A real torture rack where they separated the bodies of traitors by stretching their limbs!

…but the boys were getting antsy so we let them stand in the main square and watch the British soldiers guarding the jewels.  The boys stood for nearly 30 minutes waiting for the guards– as stiff as toy soldiers– to show any humanity. 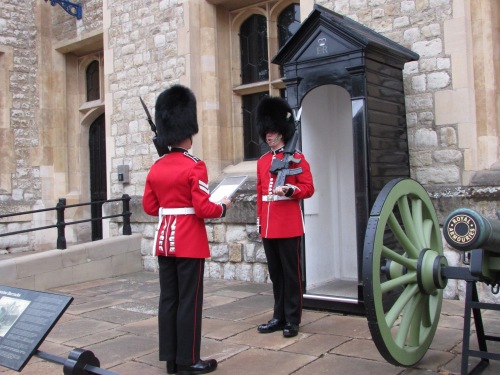 A facial expression or sneeze made the boys giddy, but they were really hoping for one of the guards to switch his rifle from one shoulder to the other. 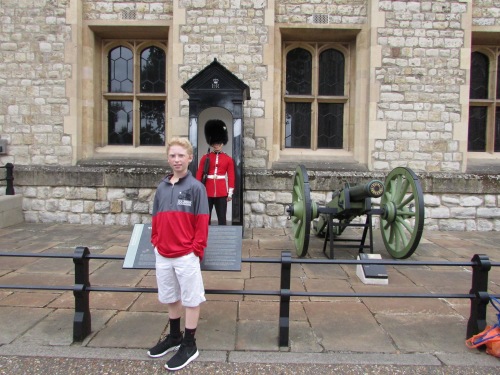 You just never know what will engage a kid.

Stay tuned for my next post to see how we engaged the boys the rest of the week!

Shout out again to our friends, Raquel and Chris, who opened their flat to us and helped us plan our daily itineraries. 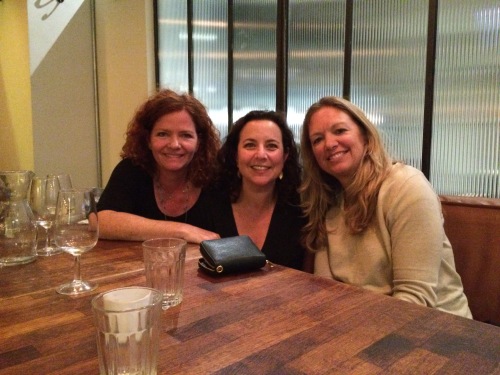 Cheers to Raquel, our Julie McCoy of London!

All they asked for in exchange was some boxes of Aunt Jemima’s Complete Pancake Mix, which is unavailable in the U.K. Who knew?!

2 responses to “London with kids: balancing culture and fun (part 1)”