Those days you wish for a parenting do-over

The last few weeks have been very busy in my part of the world. All three boys are playing travel baseball and going to various camps so it’s been hard to keep any kind of schedule. I constantly feel like I’m behind, forgetting something or someone, and generally exhausted.

So read on with a little sympathy and understanding if you would, please, cuz it ain’t pretty. 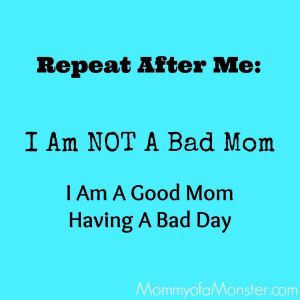 After a weekend of baseball, entertaining family, and attending our town’s two-day jam fest– Maplewoodstock– and the Taylor Swift concert, I wasn’t exactly on my game to prepare for the week. On Monday, I left early and had plans to meet friends after work, before accompanying Wilson to a work dinner in Manhattan.

It wasn’t until we were on the train home at 11pm when I realized Eli had a camp overnight the following night. I had not signed the permission slip or packed for him. Thank goodness for email, I was able to get the slip and the packing list at that late hour.

As I ran around Tuesday morning trying to find a flashlight and make breakfast for my other boys, Eli disappeared. I was just putting $10 in a ziploc bag for him to buy treats at the water park when Aden started screaming from upstairs…

Me: (still patient) “Did you take money from my drawer?”

Me: “Ok, then you won’t have a problem with me checking your pockets.”

He stands there with a look I’ve seen too many times before. You may recall that Eli has history of stealing and lying about it. We’ve had several discussions– within the last month– about respecting the belongings of others and telling the truth.

Childhood phase or gateway to life of crime?

I found the $20 in his pocket and flew into a rage. I don’t love that he took it– and now I’m worried he’s been using that drawer as his personal bank for god knows how long.

But staring me straight in the face and denying it sent me over the edge. I yelled at him (a lot) until he cried, and then the camp bus pulled up.  I gave him a lame hug and sent him off for 36 hours, with my harsh words stinging in his ears and the pain of guilt weighing heavily on my heart.

In a moment of insanity, I signed Aden up for a 5 week writing class this summer. I feel strongly that my boys should have interests outside of sports, and Aden has a lot of unstructured time so we agreed he would take a class on writing about books. I put the class time in my phone on Wednesdays, instead of Tuesdays, so we missed the first class.

My apologetic email to the teacher was returned with an assignment to buy a book and assure Aden reads 150 pages of it before the next class. I reminded him several times during the week to read and as he ignored me I silently cursed myself for thinking the class was a good idea.

I already mentioned our insanely busy weekend so on Sunday night I realized he had not read one page of said book. I told him when he got home from camp Monday there would be no TV or video games until he read a lot of that book.  As we were out Monday night, I had my sitter remind him to read the book. On Tuesday morning I asked Aden if he read any of it and he triumphantly told me he read all 150 pages!

I was thrilled. Until we realized he read 150 pages of the wrong book! He “didn’t remember” me telling him which book to read, and it didn’t occur to me to be specific with my sitter.

And on top of that,  I was rushing to get him out of basketball camp early to get him to another town for this class and I forgot to bring him a journal he needed for the class too.

Feeling better about your parenting skills now, aren’t you?

Despite the knots in my stomach as I offered lame excuses to the teacher, it all worked out and he actually enjoyed the class, even without having read a single page. To reward him for his positive attitude, I took him for a frappucino at Starbucks. A little redemption.

But alas, our detour made us late getting home and we had to rush to get him dressed for his baseball game that night. Then he couldn’t find his game jersey. Anywhere.

The jersey in question

We turned the house upside down and as the minutes ticked away…. he was 10, then 20, then 25 minutes late for warm ups. He started yelling at me and refused to answer every time I asked him to retrace his steps on the last time he wore it. I started to get angry (again) and we argued until he finally found it in the bottom of the car trunk. Grrrr.

As I dropped him a full 30 minutes late for warm ups, he slammed the door of the car and didn’t even look at me.

Another banner day of parenting.

Every time I thought of Eli at camp I felt sad, and I couldn’t shake my bad behavior with Aden for the rest of the night. If I had been less tired, more patient, more organized, more focused, I could have handled each situation better, with a less unpleasant outcome.

So far, my boys seem to be forgiving (or perhaps just completely indifferent) when I have a bad parenting day.  But I’ve realized in my 15+ years of this mom gig, that while it feels really crappy when you screw up, you always have another chance to make it right.

You have no choice but to wake up and try again.

Make me feel better by sharing one of your low parenting moments in the comments.

This entry was posted in Low Parenting Moments and tagged frustration of mothering boys, having a bad parenting day, low parenting moments with 3 boys, parenting boys frustrating, wish i could have a parent do over. Bookmark the permalink.