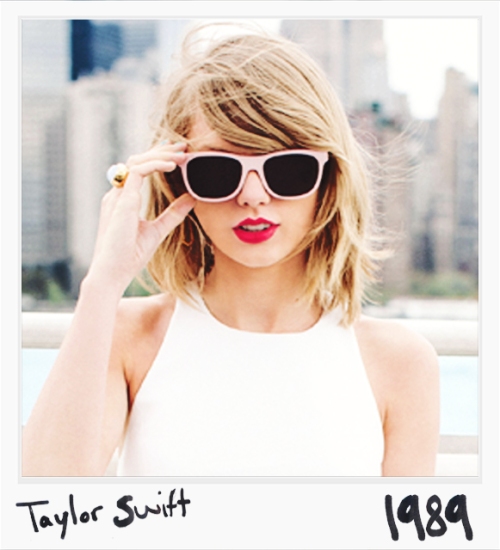 I can’t get the “Bad Blood” tune out of my head after seeing Taylor Swift live at MetLife Stadium last night. A lot of the show stuck with me today and I’m hoping will stick with my 9 and 12-year-old sons who also sang, danced and waved hands late into the night.

Aden asked for a ticket to the show for his 12th birthday in May so the grandparents contributed to the (very expensive) ticket fund. Eli got treated to the concert by his Aunt Beth and Uncle Jon for an early birthday (and Hanukkah, and probably 8th grade graduation– those tickets are $$$!) present. 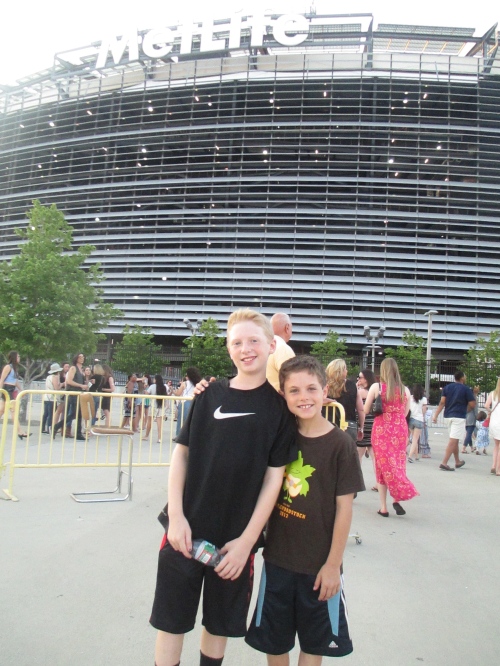 Some were surprised to hear my boys wanted to go because Swift’s fan base is largely girls. But I’m proud to say my boys are pretty evolved, and care more about good music and pop culture icons than stereotypes. Can’t imagine where they learned that.

There were not many boys in the audience, true. The sold out show was primarily tens of thousands of screaming, devoted girls and women. The age span went from 7 to 40-something, if you include the accompanying moms who seemed to like her as much as their daughters.

I don’t know if I’ve ever seen concert fans go all out like this. There were thousands of girls dressed up– it was Justice meets Halloween.

The girls seemed to be clumped in groups, marked by their own unique spin of Taylor-fashion: colored tutus, matching jerseys, giant sunglasses, light up jewelry, cut and beaded tank tops, and of course, Taylor concert t-shirts.

These girls were dressed as Grammys!

She’s gotta be making a fortune on merchandising. Even before the concert started they were sold out of most sizes. 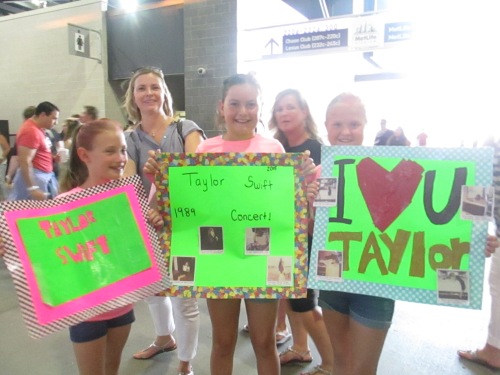 Oh and the signs—such creative, labor-intensive signs these girls brought.

Giant letters that spelled out song titles, accessorized with LED lights to be seen in the dark, and hot pink poster boards with messages to their idol. Adorable!

Taylor gave the love right back. She opened with “Welcome to New York,” which made the crowd go wild… 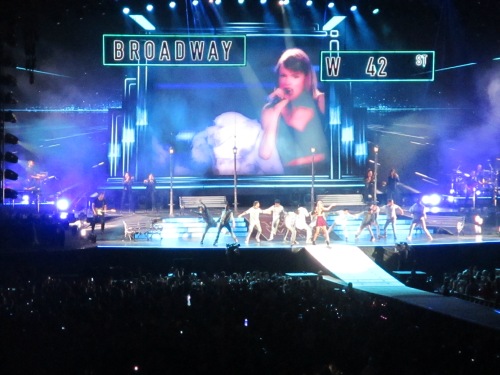 … and sang many hits from 1989 and some favorites from past albums, including an acoustic version of “You Belong to Me” and a slowed down version of “Love Story.”

Although I don’t have girls, I was a girl once and remember listening to my favorite songs over and over to memorize every word. I remember belting out lyrics into my hairbrush and making up dances. We may be living in a digital age of disengagement but loving music in that way hasn’t changed a bit.

The fans sang every word all night long and with such passion and gusto, you couldn’t help getting swept up in the moment.

As expected, there were at least 7 or 8 costume changes– all accentuating her impossibly long legs and svelte figure. I loved all the costumes– the black leather badass rock star getup for “Bad Blood” was my fav– and although she doesn’t do choreographed dance much, she has perfected the hair flip, runway strut, and over-the-shoulder flirty look.

Everyone got a white plastic bracelet when they entered the stadium, which had special lights inside that lit up on command. It was so cool when they changed colors according to the song, or the floor seats lit up a different color than the stands. When it got dark, she said “lift up your lights so I can see every one of you!” and the whole stadium lit up like the Rockefeller tree.

Taylor seemed extra jazzed about the crowd Saturday night and promised special guests. Friday night she brought out a bunch of gorgeous models, Lena Dunham, and the Women’s U.S. Soccer team. Saturday night, more gorgeous models (I would name them but didn’t really know who they were besides Gigi Hadid,) and the actress who plays “Crazy Eyes” in Orange in the New Black Uzo Aduba (random!)

We also got a bonus song that made the girls crazy when Nick Jonas came out and sang “Jealous” with Taylor. 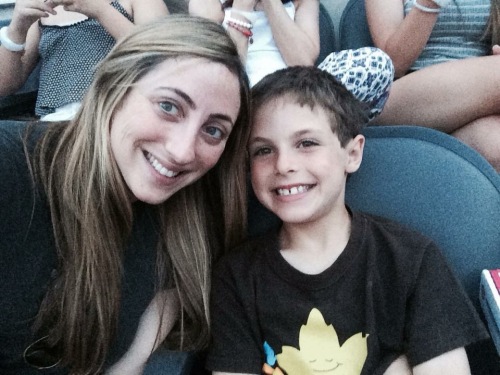 Beth and Eli. It was his first concert ever!

She talked a lot about friendship– there were also videos between songs with her gaggle of gal pals, who all seem famous. Love the positive, relatable themes about being a good, supportive friend, but her circle seems extremely unattainable!

What I love about Taylor is that she really appreciates the fans and seems to take in the significance of the moment. At one point, she said she spaced out for a second because she was looking around and soaking up the feeling of 60,000 people traveling from all over to spend their Saturday night singing all the words to her songs.

She talked a lot during the show and I loved her message of empowerment and inclusion. She reached out to those who may be going through a hard time, overwhelmed by life’s choices and feeling left out sometimes. Don’t let anyone hurt you and or make you feel bad about yourself, she warned.

Taylor has an enormous platform and she’s using it for good. I wish I’d had someone like her to idolize when I was growing up and feeling awkward and insecure, when I was fighting with my girlfriends, and didn’t understand boys. I loved Madonna, but back then she wasn’t exactly about loving yourself for who you are.

Cool fireworks show during the “Shake it Off” finale

That’s why I’m so happy my boys were there to hear her words and feel the girl power in the stadium. Taylor’s message is as important for them to hear as the females– maybe even more so. 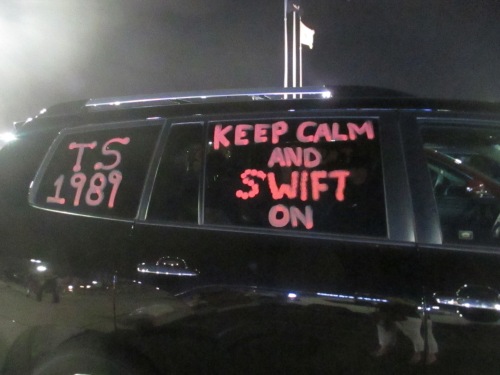 That girl oozes with poise and talent. She can sing, write, connect with fans and hold the attention of thousands, But what I loved most was the joy she exudes onstage. When you watch someone successful and truly happy in their element, it makes everyone feel like anything is possible.