Wilson’s brother has been single since I met him 18 years ago. He’s a great guy– a catch– but he was the Goldilocks of daters. He met scores of women over the years through setups, online sites, and bar hookups, but could never find the right one. He also has a tons of friends, a successful career in advertising, and quite enjoyed his independence.

We knew he ultimately wanted to meet someone and settle down and hoped he would find a lady who was just right, but as anyone in Manhattan knows, the dating pool shrinks as you age.

I tried to set him up a few times with the sister of one of our closest friends. She’s a catch herself– pretty, fun, curious, and so easy to be with– we all love her.  They were both in relationships, so the timing never clicked…. until August 8, 2013.

They had their first date at Vanguard, a wine bar on the Upper East Side and there was a spark right away. They discovered a lot in common– they both graduated from Syracuse– and made each other belly laugh.

It was pretty clear early on — to them and everyone who knew them well– that this was different from past relationships. This was for keeps.

Wilson had a “four seasons” rule when we met that precluded him from proposing until we had been together for four seasons. (While a normal person might think that was about a significant passage of time, and mood adjustments in accordance with temperature and environmental changes, for Wilson, that just meant we had to be together through basketball, hockey, baseball, and football seasons to make sure I understood how much time he spent watching sports.)

The happy couple dutifully dated through their four seasons– meeting family, taking vacations, celebrating holidays, and surviving several months when she had to nurse him back to health after an infection that resulted in two back surgeries.

In April, they moved in together and the families started to get excited that this could be it.

So when the dashing groom-to-be (DG)  told Wilson he was shopping for rings, we were giddy, but had to be cool. We didn’t want to push, interfere, or jinx it.

We needn’t have worried because DG had it all under control. This man– who previously never held hands with a woman in our presence or got up off the couch to greet someone hello– set up the most thoughtful, romantic, well-executed proposal I can remember ( except for my own of course.)

He told his blushing bride-to-be (BB) that he was taking her out Friday night to celebrate the anniversary of their first date. He sent an Evite to her close family and his, saying he was throwing her a surprise birthday party (her birthday is next week) to throw them off because he knew (correctly) that if too many people knew the truth, the surprise would somehow get spoiled.

He had to spill the beans to his family because he wanted them to be there to celebrate. Wilson’s dad and stepmother flew in from Florida, his aunt and uncle came from California, and his cousin drove in from Cleveland to be there. The BB’s family– from the tri-state area– all planned to be there too.

For weeks, DG had meticulously planned the evening, inventing lie after lie to throw her off the trail.  Cool as a cucumber, Friday morning DG gave BB an envelope with the first clue of a kind of scavenger hunt mapping out the night’s activities. The first typed note read “vino,” and she guessed they were going to Vanguard for the first stop. When they got there, they had a drink before he gave her the next clues for the next three stops– each stop correlated to an event: the first place they kissed, said I love you, etc.

Stealth messages to ensure the surprise

Meanwhile, Wilson and I took the train into the city and met our friends, David and Allison– BB’s brother and sister-in-law– at BB and DG’s apartment to set up for the party. DG had taken the day off work to clean the apartment, set up the clues, and get food and drinks for the 20 guests expected.

At the third stop, the rooftop at the Gansevort Hotel, DG got down on one knee and asked BB to marry him. Although she knew it was coming, she had not expected it that night and was thrilled. She of course said yes!

The next clue suggested they were staying for a night at the St. Regis Hotel to celebrate so they had to go back to the apartment to pack a bag. DG had told the doorman to call us when they arrived so we were quiet when they approached the door.

When she opened it and saw us all standing there she was surprised all over again.

She giggled, she dropped her jaw in shock, she cried. And DG just smiled and took it all in. He created a memory and a moment for all of us. The room was busting with joy, and it wasn’t just because of the flowing booze.

BB has her own version of the night

It took about 12 hours before the wedding planning began.

DG did a great job on the ring

BB’s already looked up venues, called bands, and pinned style photos on Pinterest. I forgot how much fun it is to think about registering and honeymoon planning. The fellas are already brainstorming locales for what is sure to be the wildest bachelor party Wilson will ever attend. (Yikes.)

DG kicked ass on his proposal and engagement celebration. But the most romantic part of the whole thing is watching them planning a life together. 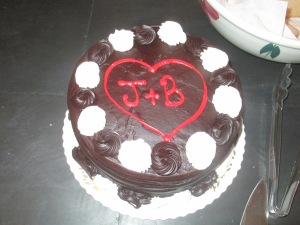 Of course, there will be indecision, fighting, and stress. But right now, it’s all hope and possibilities.

I love romantic stories. How/where did you or someone you know get engaged? Tell me in the comments!