My moment of Zen at the Daily Show

I crossed off another item on my pop culture bucket list when Wilson’s brother recently hooked us up with tickets to The Daily Show with Jon Stewart. Whether you watch it religiously like I do, or have caught it only once or twice, you know that Stewart and his writers are brilliant, searing, and very, very funny.

I DVR the show every night and refuse to delete an episode until I’ve watched it.  Even months later (Wilson complains because I’m still hoarding shows from last April,)  the sketches are so clever and smart, I’m entertained and enlightened.

When we arrived at the studio on the west side of Manhattan there was a long line of people waiting outside in the cold. A sign over the entrance says in Old English type, “Abandon News, All Ye Who Enter Here.” 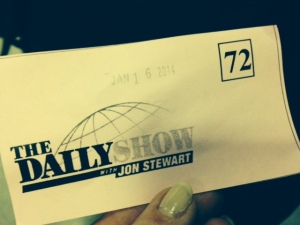 Our VIP tickets got us inside right away but we had to stand and wait for another 30 minutes before going into the taping. Nothing says VIP more than a 23-year-old PA with a headset and an inflated sense of power telling you where to stand.

I was surprised at the large size of the studio. When watching at home, it feels like an intimate set. I pictured a small audience, sitting very close to Jon. It’s at least 200 people and the audience is more than 25 feet away from his desk.

The production staff hands out tickets in numbered order so the earlier you arrive, the better your seats, but it’s also a random process and sometimes you have to get lucky.  Wilson and I went with another couple and I realized too late that we probably could have sat in the center section if we had said we were a party of 2 instead of 4. (Note to self for next time.)

Instead we were led to the absolute last 4 seats of the center section all the way to the left of the stage, right behind a giant crane maneuvering a robotic camera. (Sigh.) In the end, our view was somewhat blocked but it was totally fine and we could see everything if we cocked our heads at just the right angle. 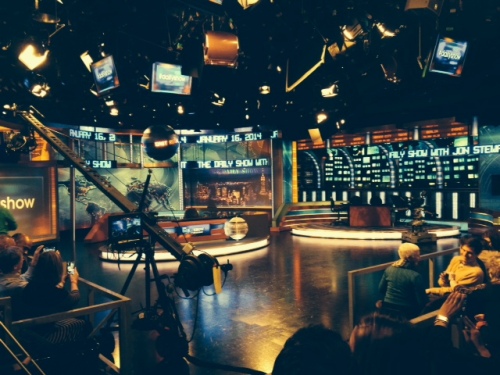 I’ve worked in production for years so seeing the set, lights, and cameras is no longer a thrill, but TDS— more than other live TV shows I’ve seen– felt like a cross between theater and a comedy club. There was a hilarious warm up guy who ran around the studio with a microphone doing jokes and interviewing audience members for about 15 minutes. He chose a few poor souls in the crowd to pick on and got everyone rolling as he turned them into blithering, giggling targets.

He also gave us direction on when and how loud to clap and cheer once the show began. The energy in the room was electric as Jon came out a few minutes later.  He also had a mike and thanked everyone for coming before taking questions from the audience. Answering every question with a delicate balance of confidence and self-deprecation, he was exactly as I imagined in person: short (in stature,) quick (in humor,) gracious, and slightly removed.

When the show started, there were no surprises to seeing it live, except how close the correspondents are when they do their schtick. There’s a green screen just a few feet away from Jon’s desk where Jason Jones did a hysterical bit about gay marriage with a giant grapefruit protruding from his tighty-whiteys.

When each performer finished and the show took a commercial break, Jon shouted out his/her name so the audience could applaud, which felt very showbiz.  I forget that these guys are basically putting on an original mini-comedic play 4 nights a week. It’s impressive, and must be exhausting.

The guest was kinda lame. Sorry Steven Brill, but you’re no celebrity. A lawyer, author, and journalist, Brill’s recent book, “Bitter Pill” is about the problems with America’s health care system. No Will Ferrell stealing loot from the green room, or Jon swooning over Jennifer Lawrence.  Ah well.

The moment of Zen was a tribute to the show’s head writer, Tim Carvell who’s going to work on John Oliver’s new HBO show. After the video played out, a nerdy looking guy who’s probably a comedic genius came out for applause and the entire crew stood up, clapped, and cheered. Seems like a tight-knit group.

It was over all too soon. 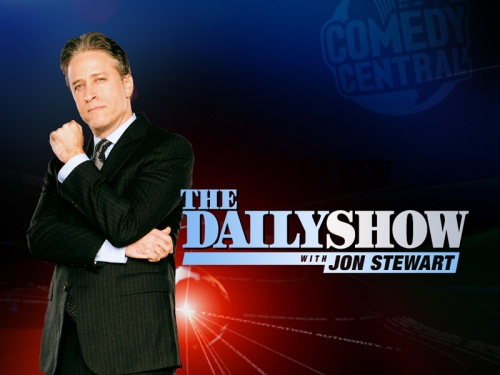 I would argue that Jon Stewart is the Johnny Carson of our time.  Even if you don’t agree with his politics, you can’t deny his intelligence and deep understanding of issues. Most of my contemporaries watch him much more than Fallon or Kimmel (does anyone watch Leno anymore? Good riddance!)

His show is clever and quotable. But he’s also expressing ideas and– between the fart and sex jokes–  making his audience question our political system and examine social issues. He’s set a new standard for late night TV: now we can laugh and think at the same time.

2 responses to “My moment of Zen at the Daily Show”