I don’t usually blog about music awards shows because I don’t know enough to opine on winners and losers. But the Grammys have become a pop culture must-see event, more for the performances than the mini gramophones handed out. 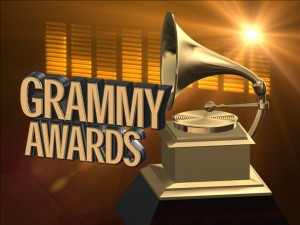 The Grammys were presented live from the Staples Center in LA, with L.L. Cool J as host. Let’s start with the red carpet…..

While at the Oscars or Globes we look for elegant couture, the Grammys is the place to take risks. J.Lo’s famous green cut-to-the-navel Versace dress and Lady Gaga’s Saturn-inspired space get-up were previous favorites. But with neither diva there, there was little to turn heads.

—Taylor Swift won best dressed with a stunning Gucci metallic short-sleeved sheath with metal detail that was edgy and sophisticated.

—Katy Perry won most whimsical in a Valentino dress literally inspired by music.

—Daft Punk guys were wearing face-covering Darth Vader-ish helmets with tuxedos that I’m too square to understand. (More on them later.)

—Cyndi Lauper had on a black and gold get-up with a cape, and bright red hair piled atop her head…which prompted my 8 year-old son to ask if she was in Shrek.

–I love Gloria Estefan but her red lace dress made her look like a blood-splattered shooting victim. Maybe the rhythm finally got her?

—Kacey Musgrave won for best country music album and sang a cute song, but her bejeweled mini-dress made her look like a Neiman Marcus Christmas ornament.

—Bey and Jay started it off with a sexy duet of “Drunk in Love.” All eyes were on the king and queen of the music prom. Sasha looked fierce with wet hair in a black sheer bodysuit and fishnets in a Flashdance-inspired chair dance.  Jay Z came out in a tuxedo and rapped around her. No sets, no dancers, watching just the two of them singing and dancing felt very intimate.

–Katy Perry never disappoints.  Singing “Dark Horse,” she appeared onstage dressed as a witch inside a crystal ball. Her number had crazy lights, acrobats, pole dancers, a life-size Trojan horse that broke apart to reveal rapper Juicy J, and pyrotechnics burning up the stage. Oh and Perry singing. Over the top? Sure, but I couldn’t take my eyes off the screen.

–Julia Roberts introduced Paul McCartney and Ringo Starr who played together in a rare duet. Not sure why she was there but she made up for her dowdy Globes dress with a hot, black, sparkly mini dress and long bed-head locks.

—Robin Thicke teamed with Chicago for a medley that included “Blurred Lines.” Thicke minus twerking Miley and gangster suit = fun to watch.

–One of the coolest moments of the night was when Pharrell, Daft Punk, and Stevie Wonder had the whole crowd on their feet boogying to  “Get Lucky,” I loved seeing Yoko Ono, Beyonce and JayZ, Katy Perry, and Bruno Mars getting jiggy in the aisles.

–Jay Z, was the night’s front-runner with nine nominations, including best rap album, rap song and rap performance. When winning for best rap song/collaboration for “Holy Grail,” Jay called Beyonce his “light” and holding up the Grammy, had a message for daughter Blue: “Daddy got a gold sippy cup for you!”

—Macklemore and Ryan Lewis won best new artist and pointed out that they made their album without a record label and went on to win a Grammy, giving hope to struggling artists everywhere.

–I had two favorite moments. The first was the amazing Pink. She puts everything into what she does. She sang ” Try” while flipping and doing the splits, dangling from scarves high above the audience. Next she belted “Just Give Me a Reason,” with fun’s Nate Ruess with such passion I wanted to cry.

–The other was the duet with Carole King and Sara Bareilles singing a mashup of “Beautiful” and “Brave,” while playing dueling pianos. King sounds as good as she did in 1985 when I’d listen to “Tapestry” over and over in my friend Debby’s basement. You could tell Bareilles was having a pinch-me moment.

–Taylor Swift got a well-deserved standing O after performing an emotional version of “All Too Well,” from her Red album.  Looking grown up and poised in a dramatic dress and Farrah Fawcett hair with just a piano and a spotlight, she sang better than I’ve ever heard her.

–One of the most talked about moments will certainly be when Macklemore and Ryan Lewis sang their hit about tolerance, “Same Love.” Mid-song Queen Latifah came onstage to officiate the marriages of 34 couples in the audience. As the group of gay and straight couples of different ages and races exchanged rings, Madonna appeared.  Channelling the Lone Ranger in a white suit and 10 gallon hat, Madge sang “Open Your Heart” intertwined with “Same Love.” She looked creepy. She’s had too much work done and although her ridiculous outfit proved she can wear anything and still look good, it seems like a wasted opportunity. Don’t get me wrong. I will always love Madonna. But I wish she were aging more gracefully instead of fighting it with everything’s she’s got.

—Trending on Twitter:  Pharrell Williams’ giant mountie-inspired hat got its own Twitter feed…. Keith Urban was bashed for his new short haircut and accused of stealing Jennifer Lawrence’s do….and everyone loved Pink.

The biggest winners of the night were Daft Punk, the French robots who won five awards, but never said a word when accepting because those darn helmets got in the way.

No matter what your musical taste, a night at the Grammys is the coolest concert around. Share your highlights in the comments.

One response to “Favorite moments of 2014 Grammys”