Watching kids come into their own

One of the things I like best about summer is that our light-speed pace slows down a bit.  That gives me rare one-on-one time with my boys and the chance to notice special moments.

I was driving home from a baseball game in another town recently when we hit a roadblock. The directions I usually follow were now useless and I had to find my way back home on my own. I don’t love driving on a good day, so getting lost with a car full of kids as it’s getting dark was extremely anxiety-provoking.

13-year-old Jacob was in the front seat and snapped to attention as soon as I voiced my concerns. He began to talk me through several turns, predicting which landmarks were coming up so I could get my bearings. I was so turned around and edgy I doubted him at first, until I realized he completely knew where he was going and decisively led me back home.

If Jacob had not been in the car, I would definitely have gotten flustered and either gotten lost, or pulled over to call Wilson or look up directions on my phone. (We don’t have a built-in GPS in the car because Wilson refuses to use one and calls it an unnecessary “crutch,” but I digress.)

I was wiping my sweaty palms on my shorts and rubbing the ball of tension out of my neck as the road ahead of me became familiar again. I smiled and looked over at Jacob.  A physical rush ran through my body of love and pride as I saw him at that moment with fresh eyes.  He was so grown up, so self-assured, so in control.

Last week, I took 10-year-old Aden to the zoo with some friends. He’s wild about animals and led us around the grounds with the enthusiasm of a cheerleader, and the  knowledge of an encyclopedia. He recognized scores of animals and rattled off distinguishing characteristics and behaviors, as if they were his pals.

Aden feeds a bird at the zoo

He knows all this because he’s constantly reading books, watching shows, and studying animals. Watching him in action, speaking so authoritatively, was pretty cool.

We took  7-year-old Eli to a party Friday night on our street. The party hosts have younger kids so my older boys didn’t want to go.  I figured Eli would know several neighborhood kids there but wasn’t exactly sure who would show up. As always, Eli’s eyes lit up at the mention of a party, and he grabbed his shoes without ever asking a detail about guests, food, or how long we would stay.

Eli’s one of the most confident people I’ve ever met. He’s always taken on any social challenge with glee and gusto. New school or camp? No problem. Tagging along to watch his brothers’ games? He’s in. Attending any social event– from  dinner with friends to a giant party with no kids his age?  Bring it on.

That’s not how Wilson or I rolled as a kid. Heck, it’s not even how I roll now. I still don’t like going to new places or parties unless I have peops I can lean on.  I’ll do it, but it’s out of my comfort zone.

The whole world is Eli’s comfort zone. He has a big personality and has coasted on charm, no matter whom he encounters.  It’s fun to watch.

Click here for video of him at Jacob’s bar mitzvah, dancing in front of the entire room. Not a shy bone in his body! 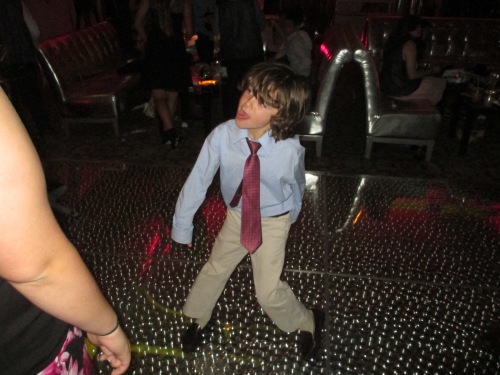 Eli gets down at a recent party

I’d love to say it’s all because of my fabulous parenting. But let’s face it, I’m not a strong or experienced driver, I know nothing about animals and I still get nervous going somewhere where I don’t know people.

My boys are becoming their own people, with strengths and traits that have little to do with me or Wilson. As much as I hate how quickly they seem to be growing up, it’s aha moments like these that make parenting big kids gratifying.

One response to “Watching kids come into their own”