Making sense of the male mind

The other day I was in the car with my family driving to my son’s basketball game. Three of my 12-year-old son, Jacob’s  friends (who are not on his team) were in the car too because — for reasons that escape me–  these boys enjoy spending every Saturday watching their friends play sports, as much as they like watching professionals on TV.

As we’re driving, one boy asked Jacob which team we were playing that day.  The conversation went something like this:

Sam:  “Dude, who are you playing today?”

Jacob: “We’re playing Ridgefield and we’re going to kill them!”

Avery: “Remember last year when you played Verona in the semis and they had that really tall kid?”

Jacob: “Yeah, we beat them and screwed up their season!”

Sam and Avery: “Oh yeah, that was sick! Wasn’t that the time Brandon went off and you had a ton of assists?”

Then my 9-year-old, Aden chimes in with yet another minute detail of a game that was played a year before, in another town. 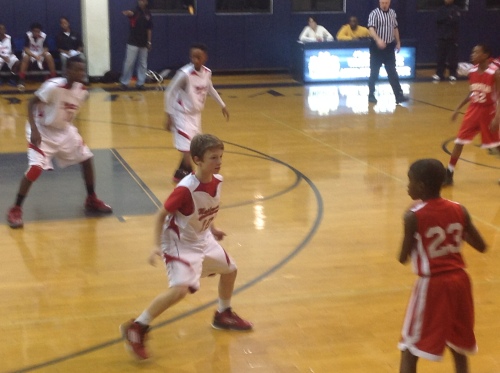 As the mother of three little jocks, I should not be surprised by the level of minutia these boys remember about a sporting event. They spew stats and plays at each other all day long. On one level I’m impressed by their passion and commitment to sports, whether stockpiling information on their favorite pro teams or their own.

But what struck me that day in the car is that these are the same boys who can’t remember where they put their shoes 12 hours ago. The same squirts who lose track of their homework  somewhere between the kitchen table and their backpack 4 feet away.

Sometimes it’s baffling to live in a house full of males. They have their own shorthand that I will never understand. And their minds all seem to work the same way.

They could be late for school or practice and stare at a coat closet for 10 minutes, wondering why they’re there….and then wander off to kick a ball of some sort, without a care in the world about the task they just forgot.

If you ask my 9-year-old to locate something– say a hairbrush in his room– he’ll go up there and look around for 15 seconds before screaming “MOOOOOM I can’t find it.”

When I get upstairs, said hairbrush is usually in a drawer or under a pile of clothes. They take “looking” literally. They just glance around and never actually pick things up or open a drawer!

Wilson’s not much better. If I had a buck for every time he said “Have you seen  my…..” I’d be able to pay a butler to find things for him. But he can tell me the score of a Super Bowl game a decade ago or describe the comeback of the ’86 Mets as if it were yesterday.

Jacob can rattle off the stats of his favorite player on the University of Michigan basketball team on cue. He can tell you about Trey Burke’s unbelievable run, including his average points (18.6) and assists (7.3). He can also tell you what he ate for dinner on a vacation we took two years ago. But somehow he can’t remember to put a napkin on his lap when he eats.

They’re odd creatures, those little men of mine.

Maybe someday they’ll get a glimpse of how I see the world if they have the pleasure of living with a woman, or parenting a daughter.

I hope they do. Who else is going to find the hairbrush?

5 responses to “Making sense of the male mind”