Team Sports Pictures: A Flash in the Pan?

Wilson and I spent today running around trying to get our boys to three soccer games, a baseball game and three sets of team soccer photos. Wilson was the hero– putting scores of miles on the car to make sure someone was on the sidelines cheering for 12-year-old Jacob and 9-year-old Aden. I stayed closer to home to watch 6-year-old Eli.

We showed up to appear in team photos, but after many years of youth sports, we boycott the photo packages, and I feel great about it.  I wrote a Carpool Candy column about it in 2010 and thought I’d provide an excerpt as food for thought.

” I spent 30 chaotic minutes this week in the middle school gym as my six-year-old had pictures taken for his baseball team. If you’ve ever been to a children’s sports photography shoot you know they are as organized as a two-year-old’s finger paint canvas. No one knows where to go… this one lost his hat… that one has only one sock….and only a third of the parents there have filled out their forms. 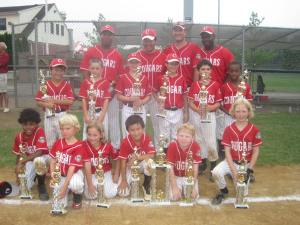 I’d rather see them dirty & sweaty with trophies than fake smiles & a background!

So as I stood in line with the other frustrated adults, dripping with whiny, hungry children (it’s usually called right in the middle of lunch or dinner time) I wondered why I bothered at all. I take pretty good pictures myself. I attend practically every game and take action shots of my kids swinging a bat, making a catch, or getting dirty in the dugout. My prints are a hundred times more captivating than a staged headshot with a fake background. And how hard is it to gather the team together following a game to get a group shot?

Yet every year, I fork over at least $17 for four mediocre pictures of my kid in uniform. I have three kids who all play soccer, and two play baseball so that’s five sets of unnecessary phony flashes at a minimum of $85….in just this year alone.

This photo has more heart than a staged one

Why do we do it? It certainly isn’t to have a professional shot of my kids to remember what they looked like at every adorable and awkward stage of development. That’s what school pictures are for.  Those cheesy mugs are a rite of passage. You want to be able to look back at yourself and remember who was in your class each year, and, of course, what trendy outfit you wore. I still have my baby book filled with wallet-sized shots of me all dressed up, sporting a gap-toothed grin or poofy hairdo. (Oh to behold my large, pointy-collared plaid dress in second grade or whale turtleneck and headband in eighth.)

In the past, we’ve purchased the sports packages so we could send the prints and trading cards to our out-of-town relatives. But when it’s so much easier and more efficient to email pictures and/or share them on a photo site, snail mail seems like a colossal misuse of time.

So if taking the sports pix are not for nostalgic or family reasons…aren’t they just another example of gluttonous waste? Do we really need another set of stilted portraits sitting in our drawers when we have better shots of sliding into third…or faces dripping with chocolate ice cream after the game? Those are the ones that capture the moment and make you smile.

We happily ordered the most decadent packages for Jacob when he was young, won over by the newness and the sight of him in that adorable outfit and his miniature cleats.  But now the excitement’s worn off.

Not bad for an amateur!

Maybe every team can start a sharing website at the beginning of the season. I would volunteer to take a team picture and email it to all the parents on the team. If every team could find one volunteer to do the same, we could use all that extra money towards something more valuable to the sport like fixing the fields, improving equipment, or contributing to a fund that covers the season costs for those in the community who can’t afford it.

Let’s shake things up like a Polaroid picture and just say no to sportography!”

What do you think? Do you still purchase the sports pictures? Tell me in the comments.

3 responses to “Team Sports Pictures: A Flash in the Pan?”