Were you disappointed or intrigued by the Mad Men  season finale?

(Spoiler alert! Don’t read on if you haven’t seen it yet. But  I gave you plenty of time to watch it on your DVR.)

I’ve been a fan of dashing, deceptive Don Draper since the beginning. It’s one of the few shows that transports me to another place and makes an hour feel like a New York minute. After an insufferably long hiatus, the show came back with big developments for all its characters as it winds down to the series finale next year.  The plot twists were unexpected, the dialog tight and intense, and the art direction brilliant.

Although I dreaded the finale (like a kid at Disneyland, I never want it to end)  I liked how it summarized each character’s journey this season and left the audience wondering what’s next for Don.

While some whiners complained the finale lacked the weight of the previous episode where Lane hanged himself in his office,  they don’t understand story arc. Lane’s suicide was the season’s climax and the finale served as the denouement, wrapping up each character’s story and perhaps giving some clues to what might happen next season and how the series will end. 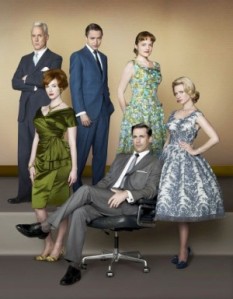 Here’s what I liked about the finale:

Pete getting punched in the face –twice! Although some say his speech at the bedside of his former lover in her room at a mental hospital made him sympathetic, I still think he’s a creepy, selfish prick. But I guess many can relate to the feeling of seemingly having it all — wife, baby, professional success, house in the burbs– and still wondering why you’re not happy.

The silhouette shot from the back, of the partners looking out the windows in  the new office space was dramatic and telling. Unlike earlier in the season when the firm was on shaky ground, now it’s full of possibilities.

Don and Peggy running into each other at the movies. They were finally able to appreciate each other as colleagues and not boss and employee. Their fondness and mutual respect was palpable, yet classically reserved.

Don walking away from Megan and into a bar. Aesthetically it was a cool shot but I loved the symbolism. It was hard to read his face when he watched Megan’s audition film, but then he went out of his comfort zone to recommend her for the job.  Why? Does he think it’s over and this is his way of giving her a career to sustain her? Does he think she has talent and deserved the shot or does he just want to please her out of guilt because he’s moving on? If he’s done, I didn’t see that coming.

Who says cliffhangers have to hit you over the head? Wondering how Don will answer the question, “Are you alone?” is enough to keep me guessing all summer.

Show creator and writer Matthew Weiner directed the season finale and talked about some of his choices in an interesting interview with The New York Times. You can read it here.

Let me know your thoughts on the finale in the comments.