How my teen son and I found patience in the woods

My 14-year-old son, Jacob, has a pretty sweet deal this summer. He’s at that awkward age where he’s too old for most camps, and too young for a real job so there’s no natural place for him to be on summer days.

His travel baseball schedule demands he be home by 4pm to get ready for games or practices most nights in July. Last summer was the first without the structure of day camp and he and his intrepid friends started a business doing yard work, babysitting, animal care, and other odd jobs during the day.

It kept him busy enough and put more than $300 in his pocket, allowing him to purchase his own iPhone, plus the insurance and part of his monthly bill. What parent could argue with that kind of spunk?

Jacob’s business flyer. Love how they use “high school freshmen” as a selling point.

The boys of “A Helping Hand” are back at it this month, but when they don’t have a job, there’s too much down time for my comfort. Wilson and I require Jacob to read every day for an hour, work on his blog (JakeKeepingScore.wordpress.com) at least twice a week, and do chores around the house so he doesn’t turn into a lazy slug.

So far, so good. There’s certainly been plenty of sleeping late, bike riding around town with the fellas, and eating many, many, many Taylor Ham, egg,and cheese sandwiches at Bagel Chateau. But that’s what summer’s for, no?

Last week I was meeting my friend, Holland, to take our weekly run on a path in the South Mountain Reservation, and decided Jacob needed some exercise. He was not psyched to haul his ass out of bed (he had stayed up too late watching a Criminal Minds marathon on OnDemand) but I gave him no choice.

We did our usual 4-5 mile loop– us chatting away, Jacob tuning us out with his iPhone music)– but when we got to the end of the run we decided to walk another loop. It was hot and humid and Jacob preferred to rest. I was cool with that, gave him some water and left him by the parked car.

As I walked way I tossed him the keys and said casually, “If you get too hot, just turn the car on and run the air for a bit.”

When we came back about 35 minutes later, he was sitting in the car with the air blasting. That dope turned the car on and ran the air for the entire time we were gone, draining the battery.

Granted, this is a 2002 Suburu Outback on its last legs. (I’d like to trade it in and get a pre-owned car but Wilson is digging his heels in. We will likely drive that dinosaur until it becomes extinct on an open road somewhere. I just pray it’s not me driving when that happens. But I digress.) 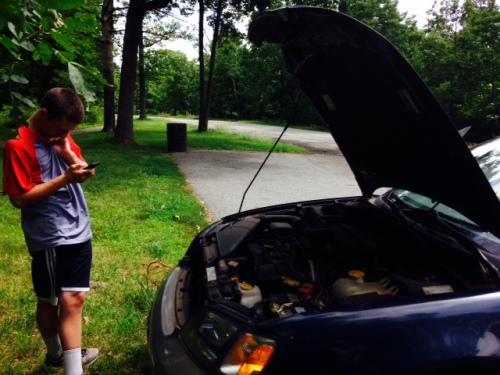 Jacob calling Wilson for advice. (He was useless and told us to call AAA.)

Yeah, I’m not an experienced driver.

I got angry at Jacob for about two minutes. Then I realized that he had no idea how a car works and didn’t know you’re not supposed to run an old, decrepid Suburu without the engine on for 35 minutes straight. He didn’t even know the car had a battery. How could I get pissed when he had no clue?

Holland had jumper cables so after some very girly attempts at opening the hood and gazing into the abyss of a car engine, we found the battery. It was extremely corroded as you can see here. 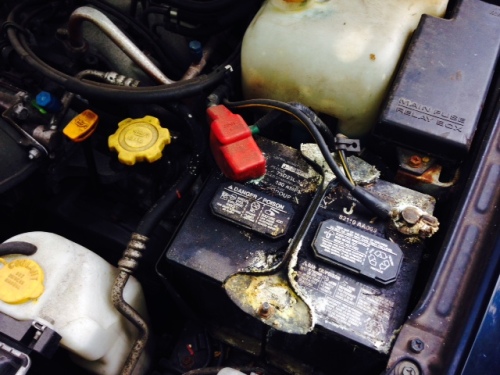 We couldn’t find the red and black plugs you need to hook up the cables, and none of the three of us were willing to stick our heads in there to try. I didn’t panic.  I have AAA.

Or so I thought.

When I called, it turned out the credit card on file had expired and our service had run out. One week prior.

Luckily, I was 5 days within the extended renewal period and gave them a credit card over the phone and the driver promised to be there within an hour. Holland offered to drive Jacob home but there was no way I was going to wait in the woods by myself, stewing over his mistake while he ate another Taylor ham bagel and watched Sports Center in my air-conditioned house.

So we sat and flipped through some People magazines and talked. My survival instincts kicked in and I tried not to use my phone or drink too much of my water just in case we were there for more than an hour. (God forbid I couldn’t check Twitter or hydrate on command.)

While he normally would have been furious, brooding, annoyed and spiteful, Jacob felt guilty that he caused the problem so he was actually quite delightful. I decided to take a Zen attitude towards the situation. I pointed out that we were lucky we weren’t freezing cold, on a dangerous highway, or late for work or a concert. We were also fortunate to be able to pay for AAA and whatever repairs we needed.

We were hot, sweaty and stuck. But there are always two ways to see every situation and I figured this was a teaching moment about what to do when your car dies, and how to stay calm and patient when faced with a challenge beyond your control. 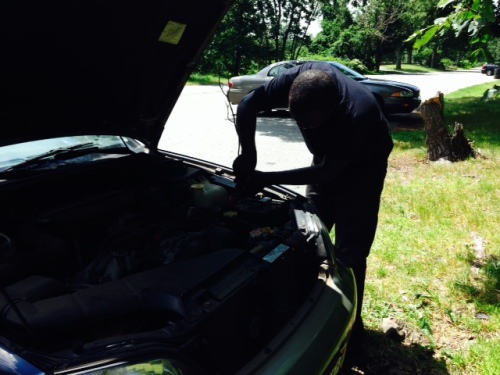 Bobby had no luck getting the car started.

Exactly one hour later,  Bobby the AAA dude, showed up with his giant tow truck. He tried to jump the car and determined it would not start, so he towed us to our repair place in town.

What are you gonna do? We made the best of an annoying situation.

We had to take everything in the trunk (baseball bag, bag of dirty clothes for cleaners, my heavy purse) and carry it home on our backs. As we trudged up the hill in the heat, Jacob said, “Well at least we got some quality time together, Mom!”

I was thinking the same thing, but wouldn’t have dared to say it out loud to my impatient, perpetually annoyed teenager.  Glad he said it first.

P.S. The battery was dead and we needed some new parts but the AAA tow was free with our plan and the repair bill was only $190. Not too bad.

Some questions for you more experienced drivers. Was there more I could do to test the battery before calling AAA? Did I need to tip Bobby for his help?  Is it worth it to purchase jumper cables to keep in the trunk if I’m too afraid to use them?

I’d love to hear your advice and similar experiences in the comments.