What Memorial Day means to this vet’s daughter

For many, Memorial Day means the beach,  parades, and barbecues. For the last several years my boys (ages 13, 10, and 7)  have played in a soccer tournament over the holiday weekend, so we watch at least 8 games during the days, and gather with friends around the grill at night.

But I want my kids to realize that Memorial Day is much more than a day off from school. The U.S. has been fighting wars for most– if not all – of our children’s lives, yet it doesn’t affect mine much at all. It’s easy to forget that there are soldiers still dying in Afghanistan, and military serving in perilous places all over the world, while we sit cheering goals and munching on cheeseburgers.

I watch the news with my kids and try to talk about the sacrifices soldiers make  for our freedom but I’m not sure what sinks in. In the past, we’ve gathered care packages and written letters to soldiers, and they’ve made cards in school to send overseas. They know a little about the wars we’ve fought, but since they don’t personally know anyone who has served, it’s difficult to make them understand how important it is to honor the military.

This year I started telling my kids about my father’s service in the Navy. After he graduated from college in 1964, my dad enrolled in officer’s candidate school. He went through a training program and served on an aircraft carrier for about 6 months.

In 1966, my parents got engaged on Valentine’s Day. Weeks later my dad was told he was being sent to Vietnam.  Faced with an uncertain future, my parents didn’t want to be separated by the war. They rushed their wedding plans and got married at the end of April before my father’s deployment in June. 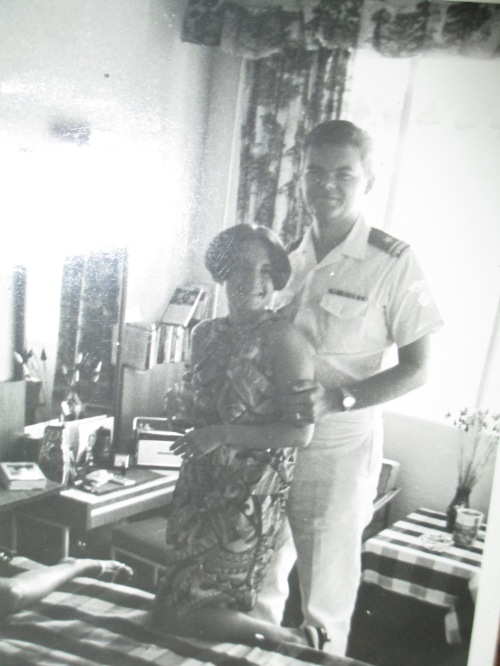 Mom and Dad during his Navy service, 1966

My brave, intrepid mother got a history teaching spot at the International School in Bangkok, Thailand so they could see each other while he was serving his duty. That’s right, my 22-year-old mother lived in Thailand by herself at wartime.

My dad was involved in weekly press briefings on the war status as a protocol and public information officer for the Navy in Saigon, which was basically a desk job. He also helped establish one of the first Navy newspapers that year and found a printing plant in Bangkok so he had a reason to see my mother once a month.

He never saw combat, probably never even shot a gun. But he had friends and colleagues blown up in bombs, and survived several near misses himself during the year he served there.

When his year was up, he left Vietnam and served the rest of his commitment in New York before returning to civilian life.  My parents were lucky to have stayed safe during that time in their lives and they spoke of it often when I was growing up.  They told stories about the characters they met as we watched slide shows of their  year of living dangerously. When I was growing up,  we were taught to value military service and revere veterans.

I recently found a letter that my father wrote to a former Vietnam POW. As part of a military initiative to support the families of POW’s, my dad was one of many who wore a silver bracelet every day with the name of a POW who had not come home. I have a copy of the letter my dad sent to the commander, when he returned to the U.S. in 1973.  Here is an excerpt:

“I found myself unable to remove the bracelet for two reasons. First, I also was a Naval officer and served in Saigon. However I was fortunate to have been placed in a protocol billet, which kept me relatively safe.  Perhaps by wearing your bracelet I was expressing gratitude that I had not had your fate. Secondly, I found myself personally committed to you. I didn’t know anything about you– still don’t, really– but felt that if nothing else, on your return stateside you might find some satisfaction from knowing there were others besides your family and friends who were thinking of you and hoping you were well and would return home safely.

And now you are back. I had intended to return the bracelet to you at this happy time, but instead I have decided to keep it among other mementoes of importance to me. I keep it so that I can remember you, and the courage you demonstrated during your imprisonment. I hope you find us worthy of your sacrifice. I have some small idea of what those years away from all that you love and admire must have meant. I hope that America can be worthy of that sacrifice.”

My father died of cancer in 1993. I miss him every day and wish I could talk to him about so many things. But today I wish he could tell my kids about his time in the Navy and how it was an honor to play even a small part in serving his country.

I have no doubt that my boys would have been transfixed by my dad’s war tales. He was a great storyteller.

I’m going to have my kids read my dad’s letter and this post to remind them of the sacrifices courageous and selfless men and women– and the families who worry about or mourn them–  are making right now.  I’d like them to always think about those who’ve served on Memorial Day, but maybe now they’ll be proud of their Grandpa David too.

Posted in I'm a Sap, In the News