Tag Archives: how much are timberlake tickets

I got my sexy on at the Justin Timberlake concert 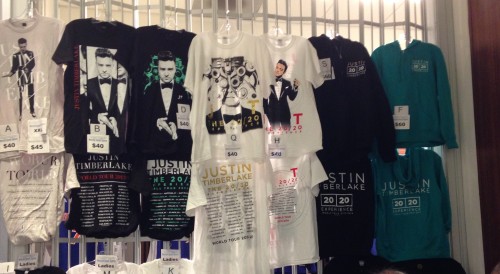 My friend, Alicia, and I had tickets to see JT last Wednesday at MSG in New York. I’d never seen him perform in person and was probably more excited than I should have been for a 40-something mom of three.

I actually stressed about what to wear. I too carefully chose black jeans, a new shirt, boots, and lots of jewelry. I’m not sure who I was trying to impress. Ok, it was Justin. I actually caught myself thinking about what I would want to be wearing if I was hanging out with the pop star, instead of standing very, very far away from him in a dark stadium with 20,000 other screaming girls.

As soon as I got to Manhattan, Alicia emailed me to say that Justin was sick and had postponed the concert until Friday night.

When I got back to Penn at around 8pm Wednesday night to go home, there were dozens of girls standing around MSG in various states of shock and grief. Some were spewing obscenity-laced rants, others were crying. I somehow was able to hold myself together in the face of tragedy.

Friday night we geared up again for the show. Tickets say it starts at 8pm but he didn’t go on until 9pm. Our seats were ok, not great. We were up in the nosebleeds but close to the stage on his right side. We paid $166 each to see him this close.

But the way the show is designed, every section of the venue gets a little piece of Justin at some point. The stage is simple– no crazy sets or props– with split levels for him, his dancers, and his band, the Tennessee Kids. The backdrop is a giant video screen playing mostly black and white photos.

JT came out in a debonair white jacket tux, cut perfectly to his frame. He sang most of his hits — old and new– and glided along the stage looking as cool and classic as Clooney, moving as smoothly and skillfully as Michael.

After apologizing for missing Wednesday’s cancellation, he told the audience, “I love you New York. I can’t give you some half-ass shit tonight!”

Justin’s one of the most compelling performers I’ve ever seen. He’s insanely talented, and seems authentic in everything he does. He’s working it, but he’s laughing and having fun. He moves with such ease, you can’t take your eyes off him. The numbers didn’t seem choreographed down to the minute. He jumped in and out of moves with his dancers, and they all seemed to riff singing and dancing throughout the show.

He played for over an hour before taking a 10 minute intermission. When he returned after the break, he was singing on one of the levels of the stage– a long bridge-like platform– when it began to rise high above the audience, and proceeded to slowly travel over the crowd from the stage up front to the back of the stadium.

As it moved, Justin danced and strolled from one side to the other so he could wave and shake hands with fans all along the way.

There were no bars on this platform so one false move and he could have been a Timberlake pancake.

There were many highlights. He wooed us with New York, New York with extra swagger. The energy in the stadium was electric during Sexy back and Mirrors, but I also loved his acoustic, slowed-down version of What Goes Around Comes Around, and the fun cover of Elvis’ Heartbreak Hotel. 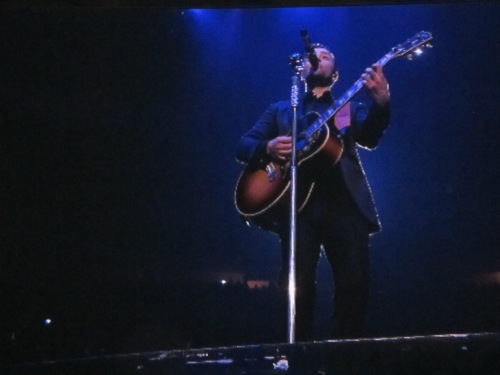 He strummed a guitar and tickled the ivories with equal flair, and made me hear pop radio songs with new ears by giving them texture.  I can’t tell you how many times listening to the sultry lyrics of Future Sex Love Sounds blaring in my iPod has gotten me through a long run.

I’m not gonna lie, hearing it live made me tingly.

I guess I’m gushing but I can’t help it. JT puts on a great show and we were all a little lovestoned. (Click here for crappy quality video of TKO taken on my iPhone!)

Alicia and I were completely amused by the 20-somethings smoking pot and pounding beers around us. One hilarious guy clearly came with his girlfriend and started out skeptical. But after just a few songs we heard him say to his male buddy, “I’m as straight as an arrow, but he’s pushing me into the gay center!!”