Do you believe in fairytales?

My youngest son, 7-year-old Eli has a flair for the dramatic. His pre-school teachers encouraged me to start him in acting lessons and he loves being the center of attention. That’s why I wasn’t surprised when he told me he was dying to see “Cinderella” on Broadway.

I told Eli and his 10-year-old brother, Aden, I wanted to take them to a show this summer and suggested “Spiderman.” Rock music and a super hero flying into the audience seemed like a no-brainer.

Aden looked at me like I’d just asked him to smell the inside of his sneaker (which could make you pass out.) “I don’t want to go to a play!” he cried indignantly. 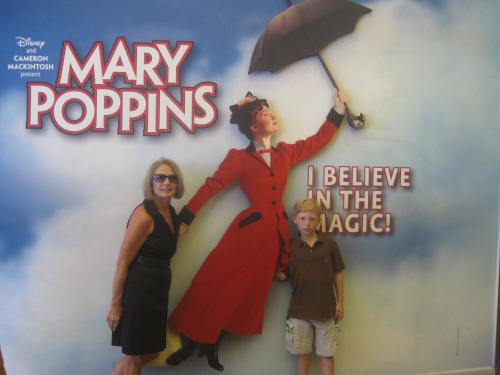 Aden and Grandma not believing the magic

I may have scarred him by taking him to see “Mary Poppins” on Broadway last summer with my mother. We all agreed it was kind of boring and the songs were just okay.

I chose “Spiderman,”  thinking it could spark their interest and I’d be able to jam a little culture into their sports-obsessed lives.

Aden wasn’t interested, but Eli’s eyes lit up.  “I want to see the one with the pretty dresses and the flying lady!” he insisted. He always runs to the TV whenever the “Cinderella” commercial comes on, gaping at the Fairy Godmother soaring through the air.

So this week, Eli, Nan (Grandma) and I went to the city for a matinée. After the Poppins fiasco I kept expectations low.

You know what, kids? I freaking LOVED it!

We all did. It had a simple story, talented performers singing and dancing their britches off, and beautiful costumes. What I didn’t expect was the magic. I don’t know how they did it, but they changed the set and costumes from rags to riches in seconds right before our eyes. It was truly amazing. And fun.

The Broadway production is the Rodgers and Hammerstein– not Disney–  version of the show, with a purposely modern twist.  They rewrote the book so the prince isn’t a one-dimensional Ken doll looking for the fairest lady in the village. He’s an insecure guy who has inherited his father’s kingdom but isn’t even sure he wants to run it.  Cinderella actually helps him through his identity crisis and makes him see the suffering of his people and effect change.

The evil step-mother lives up to her title but one step-daughter is funny and authentic– knowing she has no chance with the prince– and the other is more interested in a nerdy town rebel than being a Princess.

When the inevitable happy ending came, everyone was cheering like crazy and Cinderella got an ovation that I can only compare to the shrieking I heard at a Justin Bieber concert. I was grateful the theater was dark as I stood and clapped with tears splashing down my face.

I’m such a sucker for sap.

I had equal enthusiasm for the birth of the royal baby last month. I ate up all the photos and details like they were cream-filled crumpets. Too-cool-for-school Wilson rolled his eyes at every breathless mention of Prince George and his handsome parents.

“Aren’t you excited about it? It’s joyous news!” I said grinning like a toddler.

“NO!” he said emphatically from behind his newspaper. “I don’t care. Why should I care?”

Despite his virtues as father and husband, Wilson can be a real curmudgeon sometimes.

But he made me stop and think about why I did care so much.

It’s the same reason I enjoyed “Cinderella.” Even though I’m all about keeping it real, I love a fairytale. I love the possibility that magic can happen and dreams can come true.

My sense of wonder roused me up at 4am to watch Princess Diana and Prince Charles get married back in 1981… but then that devolved into disaster and divorce. So when charming, adorable Prince William fell for gorgeous, poised Kate, I swooned on my side of the pond.

Watching royal wedding at 5am in 2011

She’s a commoner who married a prince. They’re modern and low-key (at least by royal standards) and look so sunny that it’s hard not to believe in their fairytale.

And I’m not the only one. When I told Eli about the royal baby he smiled and excitedly asked if it was a boy or a girl. When I told him it was a prince, his face fell.

Why did he care about the gender?

“Because if it was a princess, then maybe I could go to college in London and marry her so I could be a King!”