Last weekend I was in Chicago for the Super Bowl of blogging conventions: BlogHer.  This was my second year at the conference– last year it was in New York — and it was comforting to be surrounded by so many women who also stare at a computer screen for hours on end, trying to tell meaningful stories.

When I took out my favorite notebook — a spiral large enough to hold my pen, with blank pages and Andy Warhol-esque neon prints of the Mona Lisa on the cover–   I noticed  many others with unique journals filled with scribbled ideas and lists and thought, “These are my people.”

Inspirational speakers— The conference opened with a chat with Ree Drummond, better known as “The Pioneer Woman.” Her talk was as funny, authentic, and heart-felt as her blog, punctuated by some of her famous photos. She moved from city life to a ranch in the middle of nowhere after falling hard for her husband. They make their home on the range with 4 kids and a menagerie of barnyard animals. Her blog has become so popular, she’s written several cookbooks and children’s books, and hosts a show on the Food Network, but  blogging is still her favorite endeavor. I wasn’t the only one inspired when she pointed out that she was sitting at a table at BlogHer just six years ago wondering what she was doing with her life.  And look at her now! 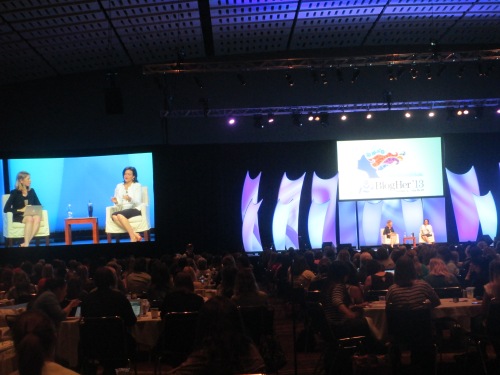 Facebook CEO Sheryl Sandberg grabbed me with her message of empowerment. I was skeptical after all the press about her bestseller, “Lean In,” fearing it would make me feel like a failure because I left my TV career to spend more time with my kids. But I received the opposite message from her in person. She talked about how potent fear can be when it comes to women and success. Why are we so afraid of speaking up, taking risks, failing, succeeding? She also got extra points when asked what she does to de-stress, because her answer was watching well-written TV, like “Girls.” I liked her so much I’m going to read the book and will report back.

Queen Latifa was the emcee of Voices of the Year

Voices of the Year– Each year, bloggers submit posts and BlogHer chooses the best 100 of the year and 12 get to read their winning pieces at the conference.   The writing was poignant and represents a wide breadth of life experience. One called “DIY is full of danger...” –about a mom who accidentally gave herself a raging case of hives while crafting– made me howl laughing.  There were also incredible posts on topics as varied as surviving cancer, being a gay Christian missionary, and parenting a child with suicidal depression.  The writers drew us in with their honesty, strength, and courage. 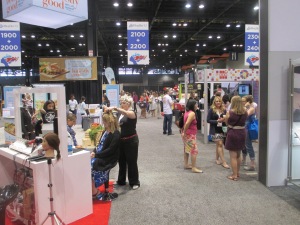 House of swag-–  What’s a convention without marketing and bags of useless swag? There was a football-field sized expo with booths looking to lure in bloggers with free stuff so they’ll promote their brands. With more than 4,000 women expected, marketers tried to create a lady’s paradise. 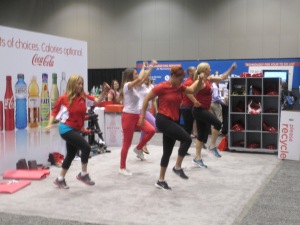 You could try a new cell phone, take an aerobics class, get your hair and nails done, or try a bevy of beauty products. Munchies I tried included cake, candy, and yogurt, washed down with champagne.

Last year the smarties at Trojan handed out vibrators, sparking thousands of blog mentions (including mine,)  so this year…lubricant.

Who doesn’t want a picture standing next to a giant bottle of lube to blog about? Good times.

I learned stuff– Like any conference, there were some helpful speakers and sessions, and some duds. I marked up my paper schedule, and referred to the BlogHer13 iPad app like I was at freshman orientation. I don’t care if I was a blog nerd, I sacrificed a workday and a weekend, paid money, and flew to Chicago so I was going to squeeze all the valuable info possible out of my two days.  The talks on optimizing social media and getting writing published were extremely useful, and an identity discussion on how to measure success if you choose not to become a brand and seek out advertisers resonated with me.

Meeting bloggers– I attended several sessions to help improve my writing, marketing and social media skills and was impressed by the success of many bloggers. I know how much time mine requires, yet there are myriad ways I could become more entrenched in the blogging community, and use Facebook and Pinterest to increase my numbers. These ladies plopped down their laptops, smart phones, and iPads, ready to get down to business, asking pointed questions while blogging, Tweeting, and taking notes simultaneously.

I met two savvy bloggers at one session who were beginners like me. I hope we’ll stay in touch and one day be chatting behind a podium as presenters on the “How My Blog Became a Book” panel, looking back on BlogHer13 and laughing at what rookies we were. Shout out to Amy at  AMyNameisAmy and Emily at Em-i-lis — let’s make it happen ladies! 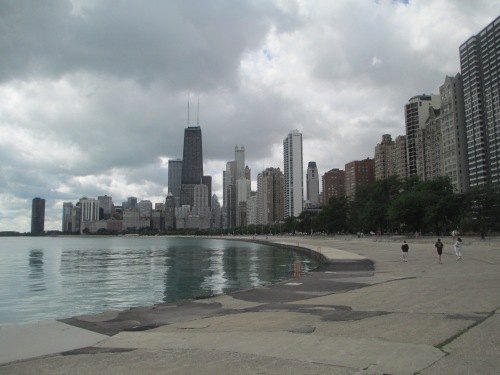 Chicago–It’s my hometown so part of my motivation was to stay with friends (thanks Sash!)  Sunny skies and 75 degree days, and watching bikers and runners on the lake always elevates my mood. Everyone looks like they’re having fun during summertime in Chicago. The food ain’t bad either.

Me time– It’s rare to have that much time to myself. I was able to catch up with friends, uninterrupted by persistent kid questions, carpools, and needs.  It was important to clear my mind a bit to absorb everything I learned and experienced at the conference.  The time away put me in a reflective mood and made me think about why I blog and what’s next.

There are no easy answers, but BlogHer13 sure got me thinking.