At the risk of sounding vain, my three sons have great hair.

It’s thick and disciplined and each one has a unique color. 13-year-old Jacob’s could be described as dirty blond or light brown, depending on the season. 10-year-old Aden’s is an impossibly shiny strawberry blond that most women would kill for. And 7-year-old Eli has a chestnut-brown mop that hangs just right. They only comb it when they exit the shower, yet even messy, it works.

When Jacob was a toddler, he had big blond curls that got a lot of attention. 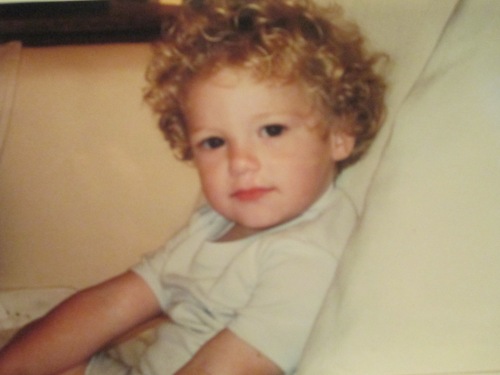 What mother doesn’t like people ooh-ing and aah-ing over her kid?  I suppose that’s what started my strong– and perhaps unhealthy– attachment to my kids’ hair.

The way I see it, if you’ve got it, flaunt it. I’ve always encouraged my boys to grow their hair and for the most part, they liked it long. The shaggy look has been in for a while so I wasn’t completely off the mark.

For the past several years they had hair like this…. 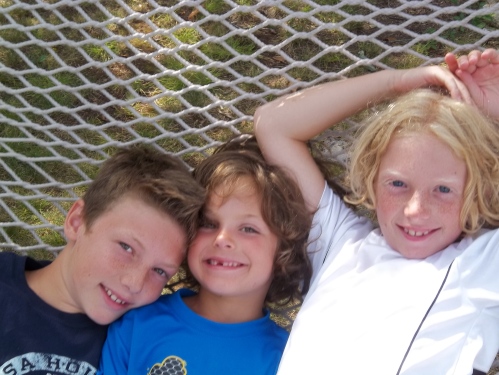 Then Jacob insisted on getting a buzz cut. I didn’t like the idea, but couldn’t think of a good reason he should keep it long, other than my own selfish desires.  We made a deal that he would cut it in the spring when baseball started and keep it short through the summer, but then grow it again in the fall and winter.

Part of the reason I was ok with Jacob trimming his tresses was that I still had Aden and Eli’s long hair to love.  Aden’s shoulder-length curly blond-do became his signature feature. Everyone from family, to teachers, to strangers on the street would comment on his gorgeous hair. 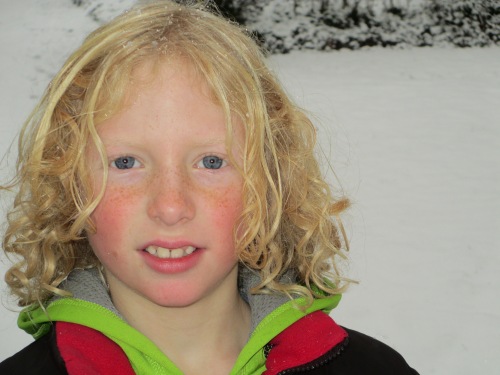 But this week he told me it was too hot and he wanted his short like Jacob’s. I sheepishly tried to talk him out of it, to no avail.

Eli has had long surfer dude hair practically all his life but he will jump on any bandwagon his brothers are riding so he also demanded a cut.

My controlling ways have permitted the stylist to use scissors on Jacob’s head, but never a razor. A buzz cut seemed too severe. I wasn’t ready. 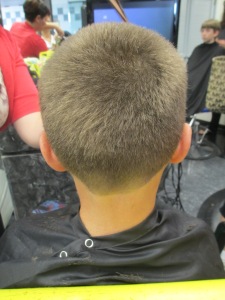 But this weekend, I gave in.

Off to the mall we went to cut their hair, and a little piece of my heart. 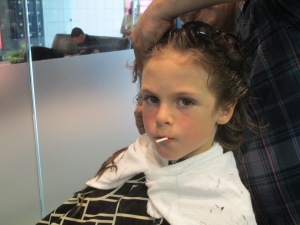 I’m being dramatic for effect. But truthfully, it really bothers me every time they cut their hair short. I’m surprised and somewhat ashamed at my shallowness, but I can’t help it. 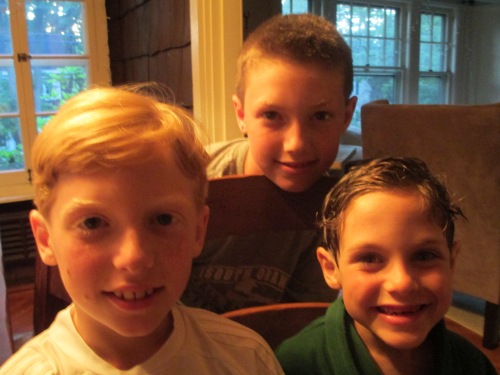 Still handsome, I know. It will grow back. I know that too.  But I still felt a little sick as I watched their locks fall to the floor. Part of me wished they would hate their short cuts so they’d grow it back and keep it long forever.  But they all love the trim. Jacob can’t stop looking at himself in the mirror and rubbing his head.

They seem older with their cropped heads, and I’m enjoying seeing their ears for the first time in a long while. I’m happy for them.  But I still can’t wait for winter when those long beautiful manes return, if only for a while.