You know you’re on vacation with 7 boys when….

Last week, our family was invited to spend nine glorious days at our friends’ house on Long Beach Island. LBI is the ultimate Jersey shore experience: beautiful beaches, the old-fashioned Fantasy Island amusement park, plenty of lobster shacks, and enough salt water taffy and fudge to put you into a diabetic stupor. 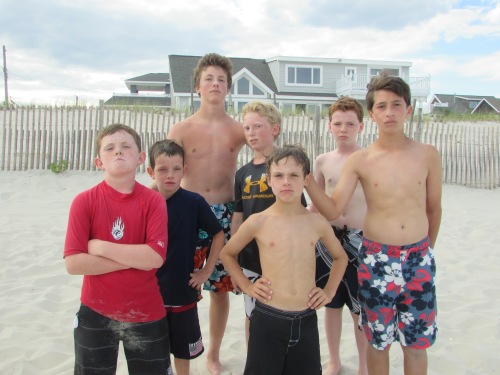 Our friends, Tony and Carmela*, have three boys, plus our three boys, and half the week we added a friend, to make 7.  That’s SEVEN BOYS, between the ages of 8 and 15.

Throw in two husbands and that’s a lotta testosterone.

When you have that many boys gaggled together, it attracts other boys, like a flashmob. We spent time with a couple of other families whose boys were eager to join our pack, ballooning our numbers up to 9 or 10 boys at a time. 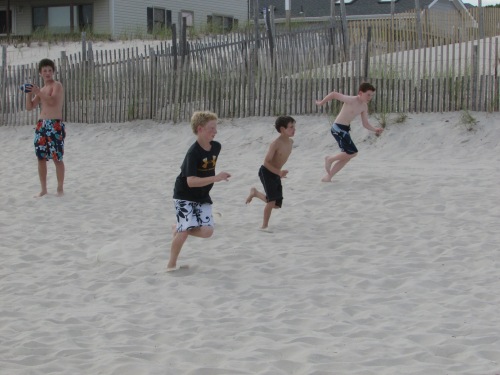 Not great odds for the ladies to have influence. So what happens when you’re traveling with that many boys? Let’s just say it’s difficult to motivate them to do anything quickly. Getting them up and out for any activity other than Xbox or mini golf is like herding cats, or trying to move sandbags off a couch.

There were too many of them. Their group power and loud voices were often too strong to fight. So Carmela and I did what mothers of boys do: kept them fed and aimed for only one activity per day. We survived, but it was certainly a unique experience as you can see below.

You know you’re on vacation with 7 boys when…. 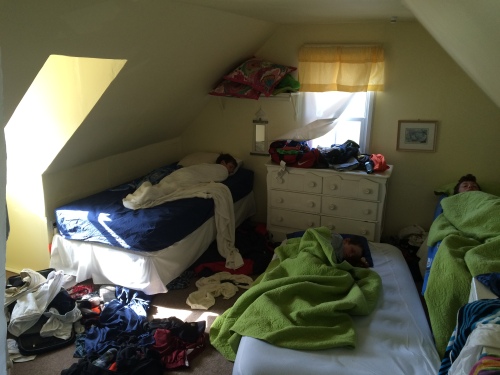 ….the surface of every bedroom floor is covered in Under Armour and Nike Elite socks.

…..you need a group rate at Mr. Tee’s and the only morning they rise before 10am is mini-golf tournament day. 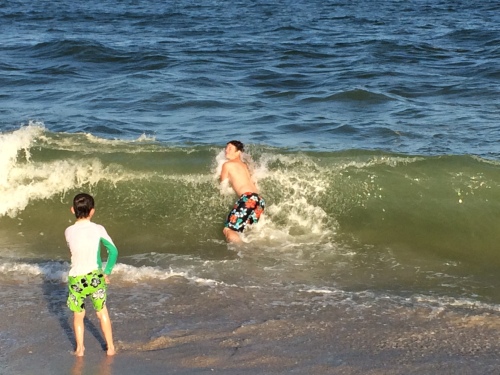 …..they insist on swimming in the ocean after the lifeguards have blown their last whistle, despite the crazy current and worried look on Carmela’s face. 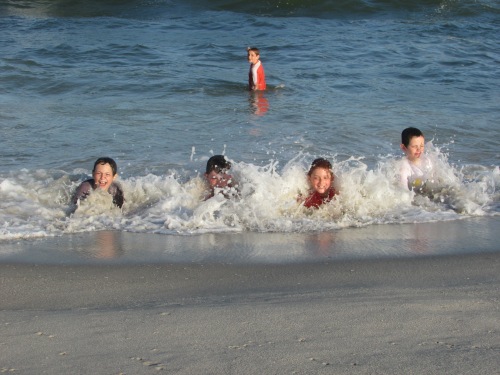 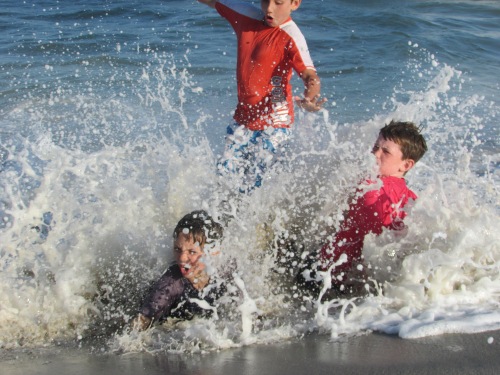 …..ESPN is on 24/7 and double speak on fantasy football trades is flying. 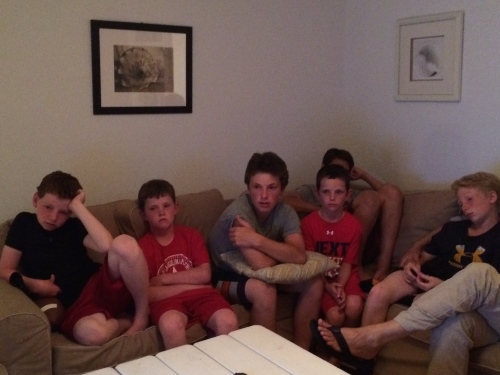 ……more than half your party leaves a gorgeous beach day to watch the Mets defend a 7-game winning streak. 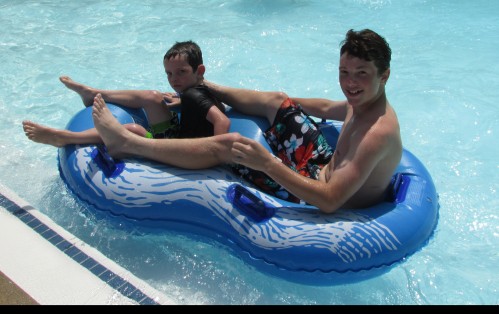 …..no one wants to stop at any of the scores of t-shirt shops and craft stores you pass as you run to the water park for the second time in 5 days.

……the boys drink nearly two cases of Gatorade in a week

…..you drink 10 bottles of wine, and almost finish bottles of vodka and gin in a week. (Remember: SEVEN BOYS!) 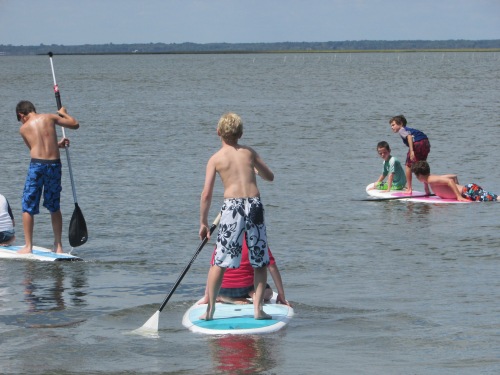 …… you rent 3 paddle boards for two hours and the boys immediately take off into the bay without life jackets, a map or a plan for return. 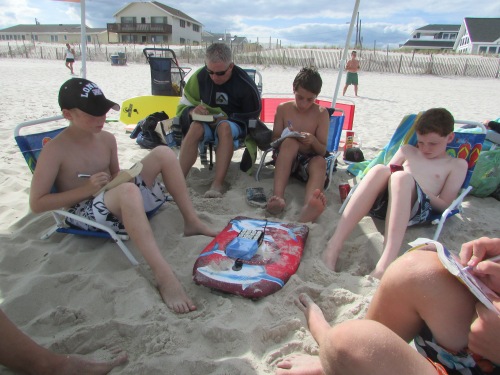 …..the interest in any activity is heightened by competition, be it football, cards, Boggle, or who gets the outdoor shower first.

…..no one goes to bed before 1130pm, purely out of pride, even if they’re falling asleep in their clothes while thumbing a game controller. 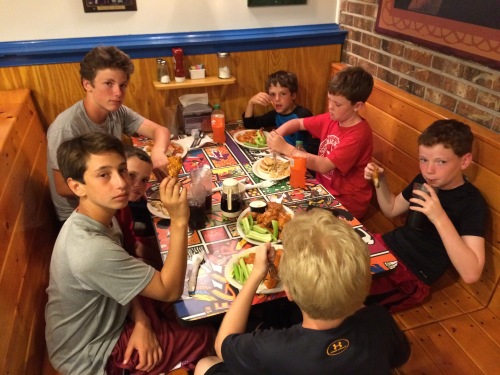 ……one of the highlights of the trip is playing football on the beach at midnight and then ordering more chicken wings than will ever be eaten at Chicken and the Egg diner at 1245am. 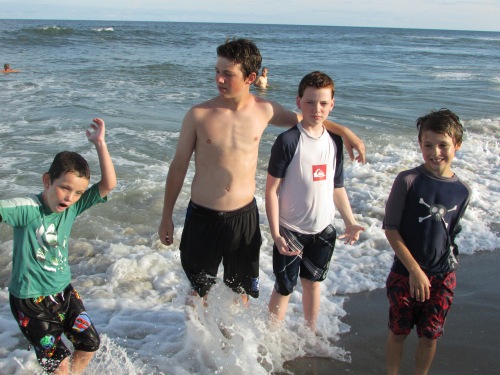 …..you take about 200 photos and not one has all boys smiling or looking at the camera at the same time. 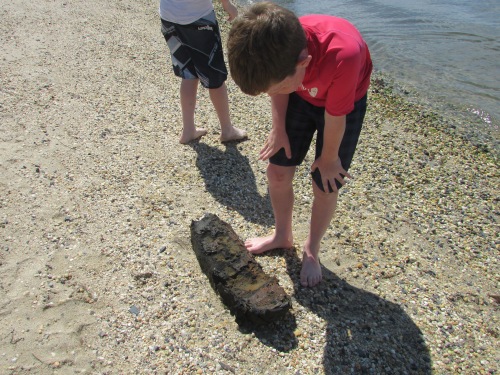 Never figured out what this gross spongy thing was….

….they squeal in horror if you dare put red sauce on their pasta or spill ice cream on their favorite shirt…. but they have no problem wiping greasy, sticky hands on their shorts in lieu of a napkin… or carrying some disgusting piece of black, slimy moss crawling with bugs and crabs across a beach. 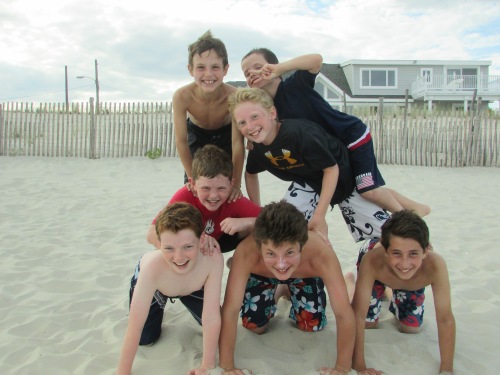 ……you can be jammed into a narrow house, switch sleeping arrangements every night, and basically spend every minute together for nine days without any hair pulling, crying, or drama. 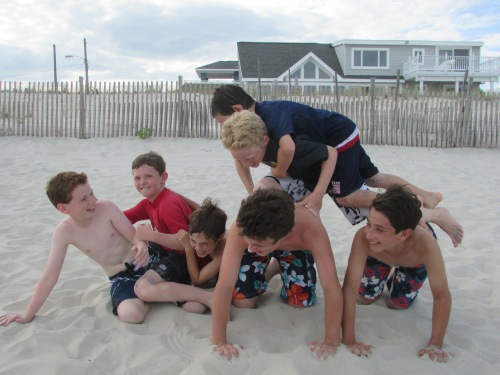 Truth is, I’d do it again, quicker than they can deny dripping pee on the toilet seat. I love me some boys.

Special shoutout and thanks to Tony and Carmela for their hospitality. Hope your summer vaca was equally fun!

*names changed in hopes we’ll get invited back!

Posted in Joys of Parenting, Travel