Our brilliant trip to London (in photos)

I’m back from a week across the pond and already missing London. When Jacob was 12 I took him to Paris with a friend and her son, so I promised Aden and Eli I would take them somewhere special when they turned 12 and this year was Aden’s turn.

I had not been to London since a family trip when I was 8 and was eager to see it as an adult. My friend, Raquel, has been living in London as an ex-pat for four years with her husband and 9-year-old son. She was gracious enough to invite us to stay with her in her North London apartment for a week. My friend, MaryEllen, and her son, Pat– Aden’s pal-  joined Aden and me on our English adventure.

At the Tate Museum looking at St Paul’s Cathedral

I’m a researcher so I bought a guidebook and map and was online for hours in the weeks leading up to the trip, trying to plan the best itinerary and find great places to eat near all the sights we wanted to see. But like the saying “man plans and God laughs,” I planned and the kids laughed. I quickly learned it was better to keep expectations low and go with the flow or I would end up very frustrated.

We chose a daytime flight because we figured the boys would be too excited to sleep on the plane and then the first day in London would be spent sleeping (that’s what happened when we flew overnight to Paris) so we arrived in the evening.

The boys were great travelers and with the help of iPads, a well-stocked snack bag,  and a deck of cards, they managed the 12 hour journey with little complaint.

The first day we were all a bit groggy and got a late start. I tried not to be impatient despite my eagerness to seize the day in a new city. Rushing 12-year-old boys to go see historical sights in a foreign land is not advisable. Better they move at their own pace and eat a hearty breakfast. 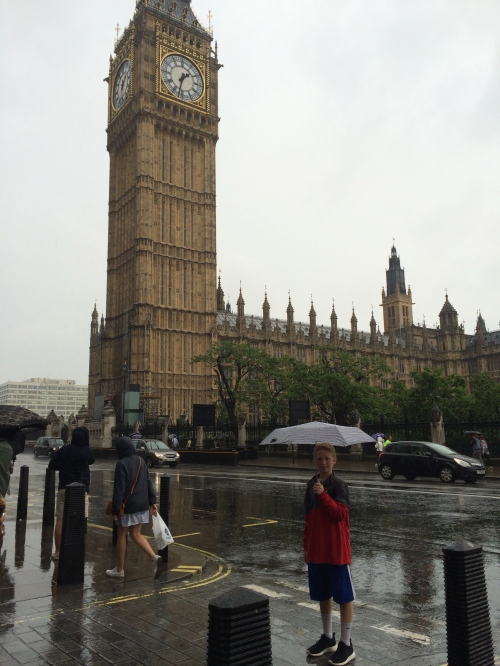 Our first day was rainy so we decided to go to the Churchill War Rooms and Museum. We took the Underground to Westminster and as soon as we stepped out, we were in awe of Big Ben.

It was starting to feel real for the boys, who even agreed to dodge raindrops to pose for several pictures. 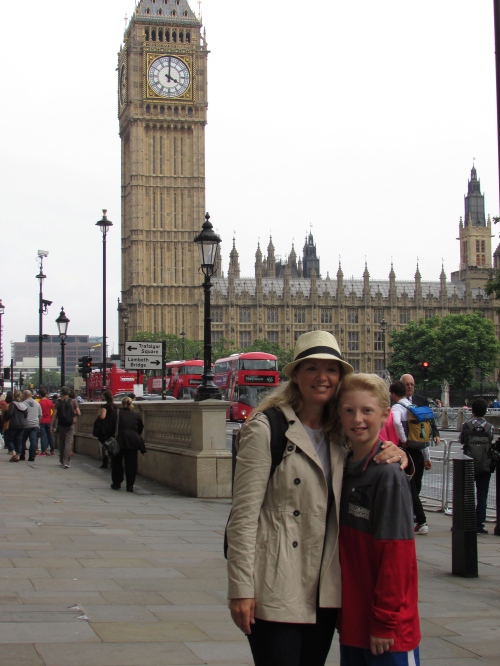 We hit several tourist sights the first day and were impressed with the boys’ stamina.

Having an apartment to return to every evening was a huge bonus.

We had space to move, there were several bathrooms, and we had friendly faces eager to hear about our adventures and help plan our next destinations. 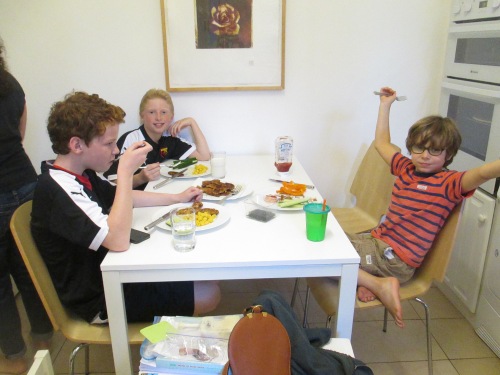 One of the best parts of the trip was watching Aden soak in a new culture. We took several rides on the top of the famous red double-decker buses, where he always wanted to sit in the front seat to check out the city. His eyes were wide open and his curiosity buzzing as he commented on the architecture, cars, and people.

Wilson has indulged me twice, supporting these one-on-one trips and I am grateful. As I explained to him, most of our family life is spent playing, watching, and talking about sports. I live in a virtual ESPN Zone.

I didn’t grow up in a house with sports fans and rarely watched a game on TV. I have a mild interest in sports from a pop culture perspective and I love watching my boys play. But it’s not my thing, and they know it. So they don’t strike up conversations about college football stats in the car or call me in the middle of the day to discuss a Mets trade. Only Wilson makes those daily connections.

So I wanted to do something with each of my boys that took them completely out of their scene, and exposed them to a new environment that would open their minds about their place in the world. These trips allow us to share new experiences– learning about history, seeing amazing sights and eating different  food– while building memories that hopefully they’ll look back on warmly.

One day on the trip we were on the Overground and missed our stop. The boys correctly said we needed to get off at the next stop, but MaryEllen and I doubted them and looked up at the map to see which stop we missed, and in the confusion the doors closed and the boys were standing on the platform outside, and we were locked inside the Tube!

Luckily we had already discussed what to do if this ever happened and they knew to stay put until we returned. But that didn’t stop MaryEllen and I from screaming “STAY THERE!” ten times as the train pulled away. There were 3 or 4 people in the car staring at us– the irresponsible, loud, stupid Americans–  aghast… as we burst into giggles. Parenting skills at their finest, we left our children at a tube stop in a foreign country.

We got back to the boys within 10 minutes and they were also laughing hysterically and didn’t stop talking about it for the rest of the trip. It was absolutely one of the best things that ever happened to them.

Raquel happens to live across the street from the famous Abbey Road Studios where the Beatles made magic. All day and night tourists come to graffiti the walls outside the building and take photos on the iconic cross walk, like the cover of the Abbey Road album.

One night, in the cover of darkness, we went down to the studio in our pajamas  and spray painted our names on the wall. 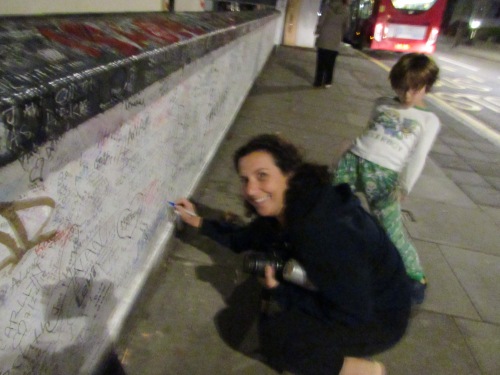 It felt naughty and thrilling all at once.

We also got incredibly fortunate when we got bumped up to business class on the flight home. It was the most luxurious 7.5 hours of Aden’s life, as he stretched out on a cozy bed, watching movies and ordering snacks from an eager flight attendant. 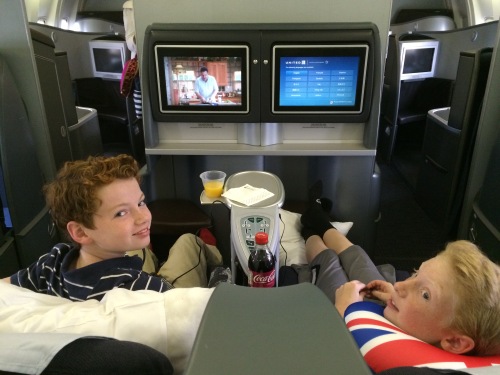 We did a lot of amazing things in London– as you will read in my next post– but it’s the funny and unexpected adventures that they’ll remember, more than the Crown Jewels or Picassos at the Tate Modern.

I’m cool with that.

Huge thanks to Raquel, Chris, and Jonas for being terrific hosts and enhancing our trip! Stay tuned for the next post about all the fun things we did and many more pix.

9 responses to “Our brilliant trip to London (in photos)”