Barry Manilow still has the pipes

Posted on June 21, 2015 | Comments Off on Barry Manilow still has the pipes 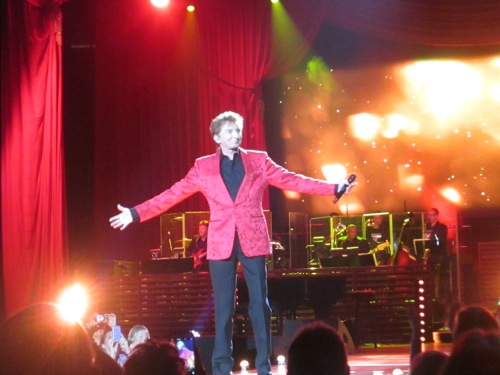 Last week I took a trip back to my childhood, listening to Barry Manilow croon his classics live in concert, and you know what? He sounded great.

I have a friend who’s a big time Fanilow and got tickets to see Barry at the Prudential Center in Newark on his “One Last Time” tour. She was kind enough to offer me a ticket, knowing I would soak up the nostalgia and kitsch more than most.

It was quite a night.

The average age of the sold-out crowd was definitely north of 50, mostly giddy, coiffed ladies — many wearing nightclub attire and high wedged shoes– clutching plastic cups of Chardonnay in one hand and taking selfies with the other.

Barry hands out glow sticks when you walk in to wave during old favorites.

My friend doesn’t mess around, so we sat in the 15th row at center stage– maybe the closest I’ve ever been to a concert performer. But being close gave me an unfiltered view of Barry’s face, which was a bit shocking.

He’s clearly had a lot of work done…like a combination of Joan Rivers puff, and Liberace’s pull.

This before and after says it all….

His hair is kind of early 90’s spiky on top and long in back….and can’t all be his own. But the guy is in amazing shape, still tall and lean and can wear a suit.

And did I mention he still sounds amazing? He opened with It’s a Miracle and soon went into Somewhere in the Night and Can’t Smile Without You. His voice is strong and he sings with the same heart and feeling he always had on oldies like Even Now and Mandy.  You probably forgot how many hit songs he had — too many to name. (For full song list, click here.)

I was surprised at how many words I still knew after all these years. My parents were huge Barry fans when I was growing up and we had all his albums (remember albums?!)  I remember my dad listening to him on his giant headphones as he putzed around the house, singing his lyrics loudly, off-key, but with conviction! Barry songs were always easy to belt out.

What cracked me up — and made me cringe a little, frankly– were all the women shrieking at him like he was Justin Bieber. During Weekend in New England, he sang “when will our eyes meet, when can I touch you,?” and those ladies went nuts.

This lady got pulled up on stage and was hanging on for dear life as the crowd squealed with envy.

Manilow is a consummate performer. Still polished, charming, and grateful to his fans. Although this concert was more Vegas than rock and roll, hearing those old songs in a crowd that knew every word gave me the same nostalgic feeling I had when I saw Billy Joel last year.

The encore was Copacabana, complete with strobe lights, falling streamers and a giant disco ball.

I’m always skeptical when artists say they’re performing “One Last Time“… and when you sound that good and you can still get tens of thousands of people to show up and scream your name, why would you ever stop?