Listen to Your Mother 2015 Love Fest 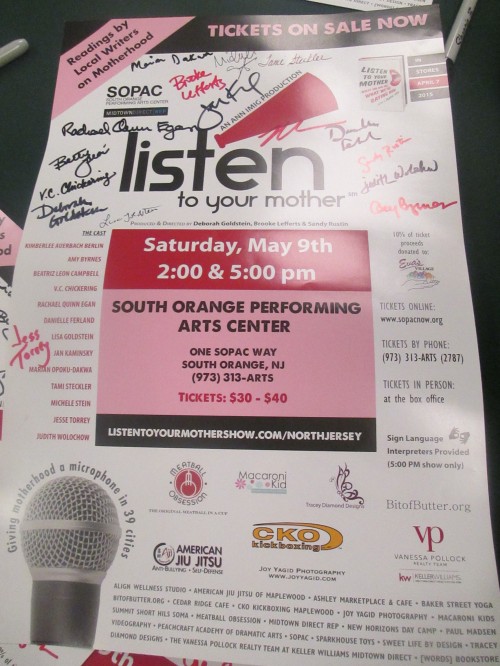 I’m still coming down off a contact high after watching 13 ladies bear their truths before a live audience Saturday in the second annual Listen to Your Mother North Jersey show.

Listen to Your Mother is a staged reading event where people share experiences about motherhood in all its forms. It started out as the brainchild of blogger Ann Imig with one show in Madison, Wisconsin and has now become a national movement– performed in 39 cities across the U.S. this year.

I was honored to be chosen to read in the first North Jersey show last year, and it was an exhilarating experience.

I wanted to stay involved, so was thrilled when last year’s co-director/producers Deborah Goldstein and Sandy Rustin asked me to help direct and produce the 2015 show.

As a former TV news producer, flexing those muscles again was extremely satisfying. Working with Deborah and Sandy was one of the most joyful professional experiences of my life. They’re both uber talented and lovely human beings. Those gifted gals taught me so much, while always making me feel an equal part of the team, despite my rookie status.

The audition process was fascinating and humbling. We had almost 70 people read their stories and had the daunting task of choosing just 13 for the show.

Aligning with the LTYM edict, we tried to find pieces with a unique voice, but a universal message about motherhood. If you’ve seen the show, you know it’s an emotional journey, so it was also important we have balance, with thought-provoking stories that would make an audience laugh and cry.

13 women earned the coveted spots with their original, beautiful words. While several are career writers and/or bloggers, some have only dabbled in writing while keeping day jobs, or just had an important story to tell.

The age range ran from 30’s to 50’s, with topics ranging from foster care, parenting special needs children, divorce, racism, and gender stereotypes to cooking in the kitchen with mom and sending kids to summer camp. Each story had relatable elements, even if the experience described was completely new.

We used very sophisticated methods to make the show order

After a successful 2014 show, tickets went quickly for the scheduled 5pm show. When the show sold out, we got ballsy and added a second show at 2pm. Although we didn’t sell out the second show, we had a terrific audience and the cast got to read twice. I remember last year being so sad when it was over, I wished I could start all over again and this year’s cast got that chance.

The first read-throughs were raw and emotional

We only rehearsed twice before show day but these ladies were ready. There were a few butterflies but those tough broads laughed in the face of stage fright. 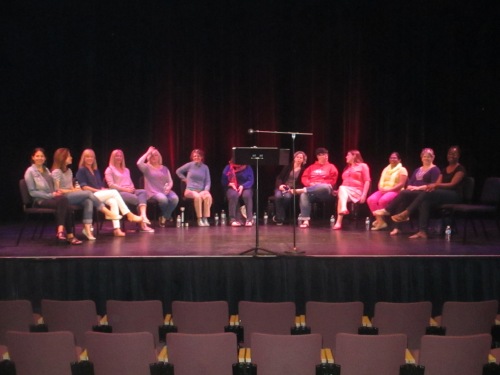 The audience seemed to enthusiastically enjoy the show, and it’s been 24 hours of love online and in person from those who saw it. A few people told me the show was now officially part of their annual Mother’s Day weekend routine.

Taking a bow after the first show. Proud and relieved!

There were many hugs and promises to see each other soon as we all parted to celebrate with family and friends after the second show. An email chain with all cast and producers continued throughout the day with Mother’s Day wishes and an outpouring of love and respect. I ran into one cast mate in town tonight and we ran into each other’s arms like old Army buddies separated by years, when really it had only been a day.

We are bonded forever by this meaningful experience.

I remain in awe of people willing to make themselves vulnerable by sharing deeply personal stories and exploring their feelings on a stage in front of 450 people. It takes a certain kind of courage and trust, and we producers were so grateful to each reader for their bravery and willingness to open their hearts.

As Sandy told the cast in the few exciting moments before they took the stage Saturday, you never know who in the audience needs to hear your story, needs to laugh or cry. Words are powerful, especially when expressed with authenticity. That’s what makes LTYM work.

Maybe you have a story to tell about having a mother or being one. Write it down!  LTYM NJ 2016 is not that far away…..

You can read more amazing stories in the new anthology: Listen to Your Mother: What She Said Then, What We’re Saying Now..