Staycation 2015: the week in photos

My kids were on spring break last week and we stayed home because Jacob had 5 baseball games. Was I bitter? Maybe a little. But it was actually nice to be home with few plans and time for the kids to relax.

My boys overindulged on-screen time for sure, but I planned at least one outing a day to make sure they got some stimulation that didn’t include a remote or joystick (I know, no one calls them joytsicks anymore but ‘Xbox controller’ is so undescriptive.)

We’re so lucky to have New York City in our back yard, and I took them in a few times to get a change of scenery and sneak in some culture without the boys realizing it.

Here are the highlights of the week in photos…..

I met two gal pals at Penn Station Friday night. We were having dinner with our husbands in Chelsea at 7pm so we bought ourselves chilled mini wine bottles (at the little store by the stairs to the Garden) which we dumped in paper cups. Then we picked up the High Line at 31st St. and 11th Avenue to walk to the restaurant.

There’s nothing like an outdoor cocktail hour, walking above Manhattan, and people watching on the High Line on a lovely spring evening! 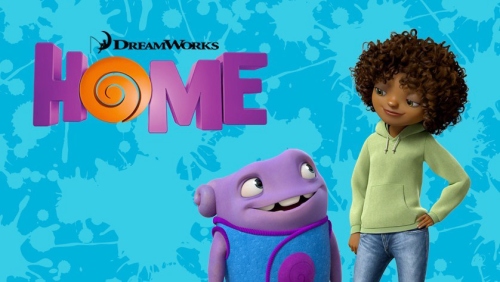 On Monday I took Eli to see the animated movie Home. We both liked it a lot– it’s a very sweet and engaging story, with characters voiced by Rihanna, Jim Parsons, JLo, and Steve Martin. I also like any excuse to eat movie popcorn.

Tuesday I took Aden and Eli to the batting cages at Frozen Ropes to hit balls off a pitching machine.

It aint cheap: $30 for 30 minutes, and the time went quickly, but it was a productive, fun activity.

We took the train into the city Wednesday and the kids picked Shake Shack for lunch. The line wasn’t too long….

and we chowed on our burgers and fries. 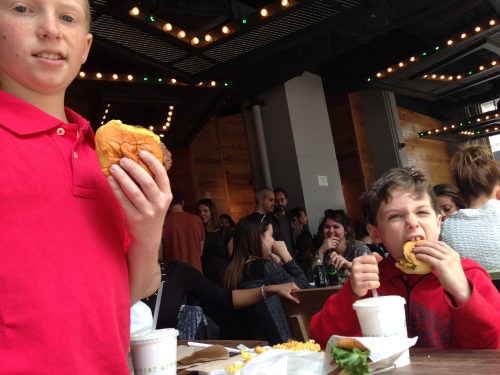 Then we walked a few blocks to see Matilda on Broadway. Eli and I read the Roald Dahl book and we had been listening to the music in the car and explaining the plot to Aden.

I was worried because Aden wasn’t so psyched when I told him I bought the tickets. But we all loved it! Amazing performances, inventive staging and dancing, and terrific music that we are still humming days later. I highly recommend!

My boys had never been to Dylan’s Candy Bar so after the show we headed east and wandered the sugar sanctuary for almost 45 minutes. 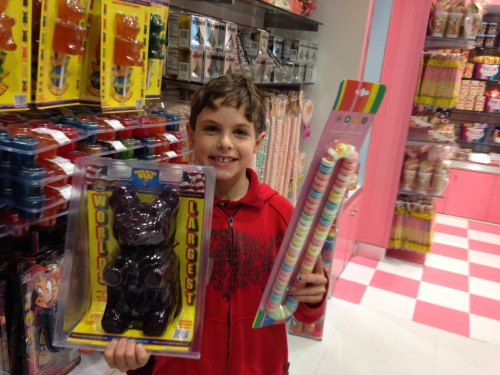 I gave them each a $15 limit but still managed to spend an obscene amount of money I can’t think about ever again. Oh well. You only live once right?

Two friends and I took our boys to the city Thursday to walk around Chinatown. We had never been to Chinatown in NY and I thought we’d walk the streets, taking in the new culture, marveling at the colorful fruit and vegetable stands, and wandering into little shops.

But I forgot I was with 7 boys whose only interest was consuming as much sesame chicken as their bellies could hold. The authentic eats at 456 Shanghai Cuisine didn’t disappoint. As you can see here, we tried a little bit of everything. The pork dumplings– both standard and soup– were gobbled up instantly, and the moo shu pork, shrimp and vegetables, chicken lo mien, and sautéed green beans were delicious. Nothing was greasy and no one felt sick 30 minutes after consuming an impressive amount of food. And the price is nice too. The lunch specials were just $5.75 each and came with soup and rice.

Although I couldn’t eat anymore, the children managed to cram in shakes and cones from the famous Chinatown Ice Cream Factory down the street. In addition to the standards, they have some very inventive flavors, including Black Sesame, Ginger, and Lychee. Thumbs up from the fellas. 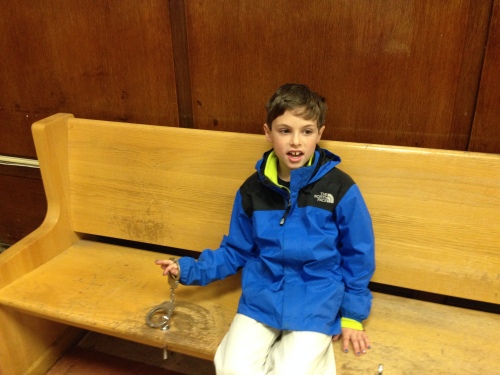 Chinatown is very close to the Criminal Court building, where our friend Chris works, so the boys got a bonus tour of a courtroom and a holding cell.

We also stopped at the mecca of sneakers, a place called Flight Club, near Union Square. Literally hundreds of technicolored sneakers line the walls of this store and I couldn’t find a pair for less than $150.

Much like me at Bergdorf Goodman, the boys browsed the shelves, knowing they could never afford the laces of most of their coveted shoes.

I must admit I enjoyed Flight Club from an anthropological perspective. It’s a whole culture of people who purchase, trade, and collect high-end sneakers and seeing so many creative designs made it feel like an exhibit in a modern art museum.

Check out the price tags on these babies! This is what thousand-dollar shoes look like

On Friday it was back to work for me so the boys had a free day to play with friends.

I asked them tonight what the highlights were of their break. Jacob groaned, which he does at any question I ask him of late.

Aden said “Everything!” I’ll take it!

Eli? After a detailed recap of all our adventures, he chose the playdate with his friend Kieran yesterday.

One response to “Staycation 2015: the week in photos”