A quickie art exhibit for kids in NYC

Posted on November 19, 2014 | Comments Off on A quickie art exhibit for kids in NYC

I like to take (or really drag) my kids to Manhattan at least once every six to eight weeks. As I’ve probably said before, I grew up in downtown Chicago and want them to be savvy, unafraid, and as metropolitan as three sports-loving, sweatpants-wearing, TV-watching,videogame-playing suburban boys can be.

Sometimes we go in because we have plans with family or friends, other times because I want them to get some culture. Those trips are a tough sell so I usually need to couple the experience with an enticing meal.

Recently, we had a free Sunday and some cousins in town from South Carolina so it was a great excuse to go into the city. I headed straight for the TimeOutNYKids website, which always has fun and enriching activities. They feature special events, but also have a calendar which tells you exactly what’s happening the day you want to go. 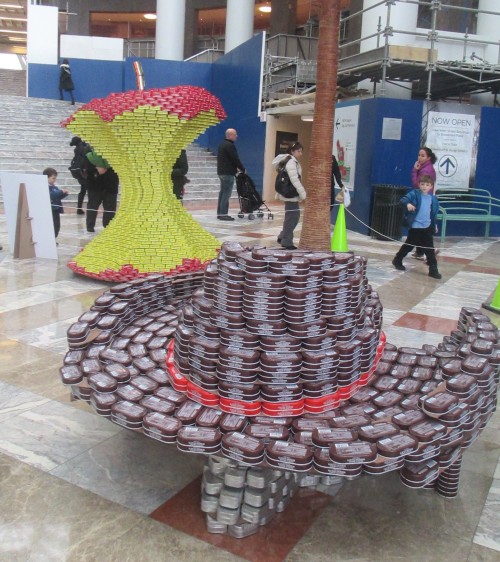 Apple core was my favorite– symbolizing NYC and healthy food– but the cowboy hat was neat too.

That’s where I discovered the CANstruction exhibit at Brookfield Place in lower Manhattan, near the Freedom Tower. It’s an international charity competition where architects, engineers, contractors and students compete to design and build giant structures made entirely from full cans of food. 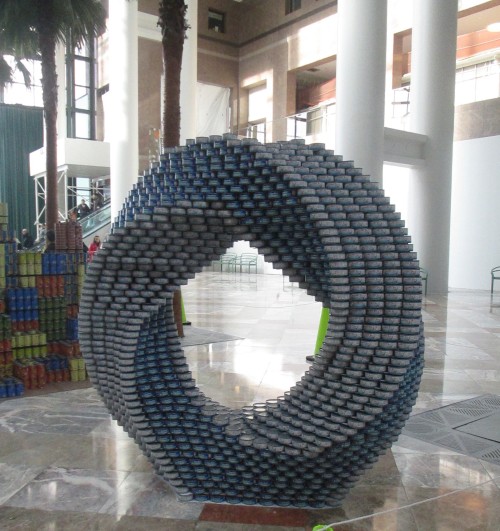 The teams create amazing sculptures out of food cans and at the end of the contest, all the food is donated to City Harvest, which rescues food to feed to the hungry in New York.

Aden tries to imitate “The Thinker”

NYC was one of 100 cities across North America and other countries such as Australia and New Zealand that held Canstruction competitions and then donated the food. The sculptures are not only impressive aesthetically, they have a theme, and some even teach a lesson about hunger and helping others.

The best part was it was only a few works so we were in and out in about 20 minutes.

Next we headed to Tribeca and put our name in at Bubby’s— home of delicious pancakes and burgers– and then walked the Highline while we waited.

The boys grumbled as we walked to the exhibit– as they do every time I ask them to step outside their comfort/ESPN zone. But they couldn’t deny the sculptures were cool.

They always admit in the car home that the experience wasn’t as bad as they expected. That’s as close to a high-five as I’m going to get, but I’ll take it.

A little culture, little social awareness, little fresh air, and then a little nosh. It was all good.

Unfortunately, the exhibit is closing this week but you can check out more about it –and see if it’s in a city near you — on the Canstruction Facebook page here.

I’d love to hear about any of your quickie cultural experiences for kids in NYC. Tell me in the comments.