Lena Dunham is “Not that Kind Of Girl”

Recently a friend posted an excerpt in The New Yorker of Lena Dunham’s new memoir, Not That Kind of Girl, declaring it “one of the stupidest things the magazine ever published” and warning friends not to read it. Within a few hours there were at least 12 comments agreeing with the post and dissing Dunham big time.

I normally avoid public arguments, especially over subjective topics like art, but I couldn’t help but become Dunham’s lone champion in the sea of critics with this comment:

At the risk of being pelted with rotten tomatoes, I love her. I’m reading her book now to review for the AP and thoroughly enjoying it. Also love Girls. As a writer I admire her unrelenting candor and thoughtful, modern prose. As a woman I’m inspired by her ambition (writing directing acting producing on her terms at 28!) and empowered by her moxie in a superficial Hollywood. Plus she makes me laugh. Out loud.

It wasn’t until this exchange that I realized Dunham is a polarizing figure in pop culture. I was under the impression that everyone thought she was brilliant, funny and innovative, as I do. 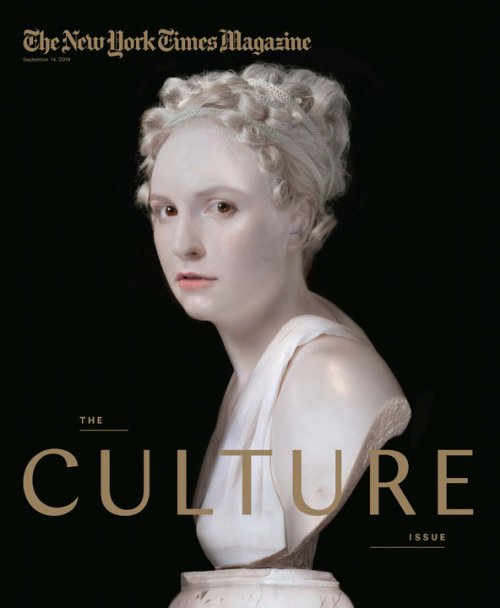 Dunham’s been celebrated all month before the book launch. I loved this cover.

I found out she was writing a book last April and immediately emailed my editor to call dibs on reviewing it. I wanted to be one of the first to read it, and secretly hoped she might read my review, which would be a thrill. That’s how much I admire her writing.

When Girls came out on HBO in 2012, I eagerly watched every episode and marveled at how someone so young could be so talented and driven. She created the show, acts, writes, produces and directs. It has her personal stamp on every episode and hasn’t been vanilla-ed down by clueless network executives.

The characters and dialogue are so authentic, I’m engaged for the entire half-hour and always wish there was more.

I can see how some could perceive her as attention-seeking or self-indulgent, but the book draws a clear line between her character Hannah on the show, and Lena. She’s actually extremely private and leads a pretty low-key life in Brooklyn. Like Hannah, Dunham struggles with OCD and anxiety. She writes candidly about how it’s affected her life and work, which is likely to help others.  She’s an artist, and a workhorse, and from all I’ve read, extremely grateful and humbled by her success.

I guess what’s turned off some people is how often she appears topless or naked in the show, because she doesn’t have the typical Hollywood body and seems completely comfortable letting it all hang out. I love that about her and envy her chutzpah.

Guess what? She doesn’t want my admiration and frankly finds it insulting:

All those moms I see on Facebook posting stories about how to raise daughters with healthy body images are some of the same ladies who diss Dunham for showing too much of hers. She has some reasonable explanations in the book about why she’s comfortable naked, but why should she even have to address it? It’s her show, her character, her vision. 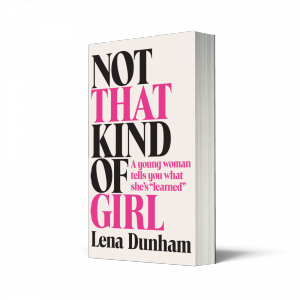 I loved the book, as I said in my review:

In her new memoir, “Not That Kind of Girl,” Lena Dunham relays a charming story about meeting a new friend and fellow writer she admires in London, drinking too much wine and projectile vomiting all over the woman’s living room floor. After a feckless effort to keep the last messy detail of the night to herself, Dunham blabs the story to colleagues in the first 10 minutes of a meeting the next day. “Sharing is my first instinct,” she writes.

It’s that brazen willingness to bare all that drives Dunham’s work, and readers of this collection of smart, funny and poignant essays will thank her for it.

You could argue that Dunham is too young to be doling out life advice, but the book’s subtitle, “A Young Woman Tells You What She’s ‘Learned,'” is a wink at readers. She acknowledges that she’s no expert, but hopes discussing intimate topics — from losing her virginity to her struggles with crippling anxiety — may normalize the daunting process of transitioning to mature adulthood.

While much of the advice is aimed at millennials, she has the wisdom and depth of an old soul….

Whether she’s your cup of herbal tea or not, you can’t deny her smarts. She’s one of those writers who says a lot with few words. By revealing just a few descriptive details and behaviors she conveys instantly recognizable characters, and can transport you right to a place by its looks and smells. Her use of language and self-deprecating humor make me giggle.

So I say give Dunham another look, naysayers. And fans, you’re in for a treat.

Tell me what kind of girl you think Dunham is in the comments.

2 responses to “Lena Dunham is “Not that Kind Of Girl””