My Doodle puppy got shaved, and it’s all my fault

You may remember that Wilson and I are new to dog ownership. Neither of us had a dog growing up and our now 11-month-old puppy, Brady, is paying the price of our rookie mistakes. 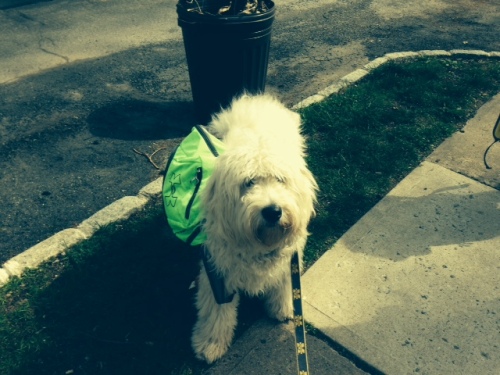 Brady wearing a backpack at the bus stop

Things have been going well with Brady. He’s sweet, smart, and very motivated by food so he’s well-trained in most areas–although he still likes to chew on stuff. In the last several months he started to expand, like one of those animal-shaped sponge toys that inflates when you add water.

The last time the vet weighed him, he was 56 pounds, but it seemed like 36 of that was his long, beautiful, white hair. I read the puppy care books, and dutifully brushed him out every few weeks. But I never cut his hair.

Like not even one time in the last 9 months since we got him.

He’d been groomed– brushed and blown out like a movie star– but never cut. I often bathed him myself in the tub or kitchen sink, I picked the disgusting goop out of the hair around his eyes, and cleaned out his ears, but scissors were a stranger to his ever-growing canine shape. 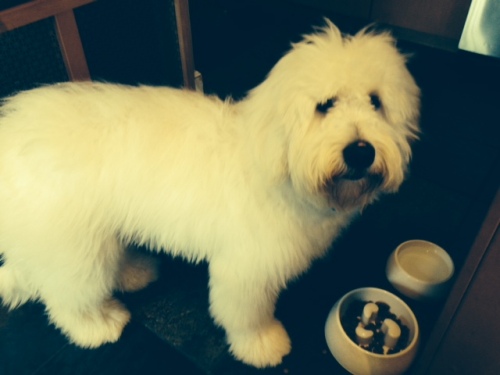 Brady with a blowout.

It’s hot and I knew his long locks were making him uncomfortable so I made an appointment at the groomer, hoping they’d give him just a trim.

But when the groomer took a close look, under all the white, fluffy hair were thick patches of matted hair, so close to the skin they couldn’t be brushed through or cut without causing him pain and stress and hours of work. Apparently puppy hair falls out and adult hair grows in, kind of like teeth, but when you don’t cut it, all the hair gets twisted together.

He needed to be completely shaved.

You may remember from a previous blog (read it here), that I felt acute anxiety and discomfort when my three boys (ages 8, 11, and 14) wanted a barber to take a razor to their long, lovely tresses. I had similar feelings yesterday when told Brady would be shaved down to the nub.

I felt sick as I drove away from the doggy salon, imagining cartoonish, oversized scissors chopping off his hair as he pleaded and yelped in helpless fear.

Maybe, but that was the guilt talking. If only I had taken him in for a cut sooner, or learned how to brush him properly, maybe we could have saved that gorgeous, downy, white coat.

He went from this….. 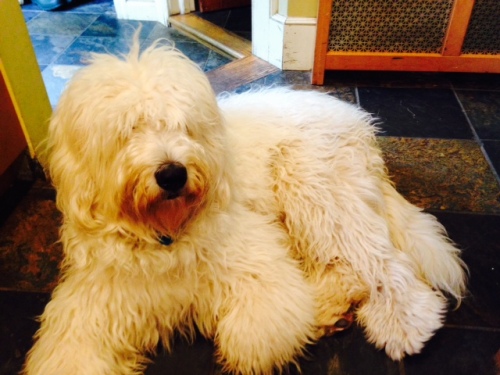 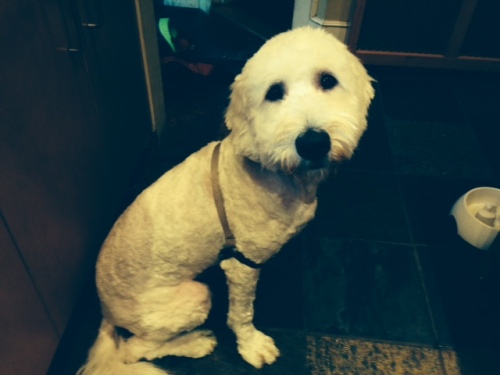 Of course he’s still sweet, good-natured, playful Brady. Of course it will grow back. But will it be the same silky, soft texture? Will he have that Shaggy DA look that made people stop in the street to pet him and smile?

We put an old size 6 t-shirt on him to make him feel more safe and prevent him from scratching and biting at his skin because it’s such a close cut.  I’m getting used to how he looks but I still feel pangs of guilt and regret every time I see him.

I’m sure he’s much cooler now in this heat. He stayed outside longer today than he had in a while. He’s also easier to walk, at half the size he used to be. Everyone thought he was a big, fat dog, but really he was just really, really furry….like a giant muppet.

Brady seems perfectly happy with his new coat. The groomer warned he might be agitated and feel vulnerable, but he’s the same energetic, playful puppy.

I guess I’ve gotta get over my Samson-like attachment to hair. I know that our insides are more important than our outsides. But I hate unmet potential, and what’s better than a good hair day?

10 responses to “My Doodle puppy got shaved, and it’s all my fault”