Billy Joel at MSG: the nostalgia’s worth the ticket price

We were all in the mood for a melody… and Billy Joel delivered.

Some friends offered us last-minute tickets to see the Piano Man a few weeks ago, and it happened to be Wilson and my wedding anniversary so nostalgic live music with close friends was a perfect way to celebrate.

I had wanted to see Billy since he embarked upon his Madison Square Garden residency of sorts, and many friends had raved about the concert. I’d seen him once in college, outside Boston and knew he was a terrific live performer.

I grew up on Billy Joel. I’m pretty sure I know every word to his 1977 album The Stranger, probably most of 1978’s 52nd Street, and years of hits after that.

He had a presence on every mix tape I made in the 80’s and 90’s. I love his music because it’s classic rock and roll, and his songs tell stories with vivid characters. I’ll always crank a Billy Joel tune on the radio, because it inevitably brings me back to the past.

I remember hearing my dad blaring “Big Shot” in our apartment, as he planted on our balcony or cleaned the tropical fish tank. I often blasted my cassette tape version of “My Life” at top volume on the boom box in my room just to piss my parents off.

If you remember life before MP3 players, Billy Joel in concert is — as comedian Jeff Garlin would say– a big bowl of joy.

May 9th happens to be Joel’s birthday so we got some bonus cameos at the concert. The first was Howard Stern who told the audience how much he loved Billy, not just for his talent but for his generosity because he was donating all the proceeds of that night’s show to the North Shore Animal League, a charity near to the hearts of Stern and his wife, Beth. 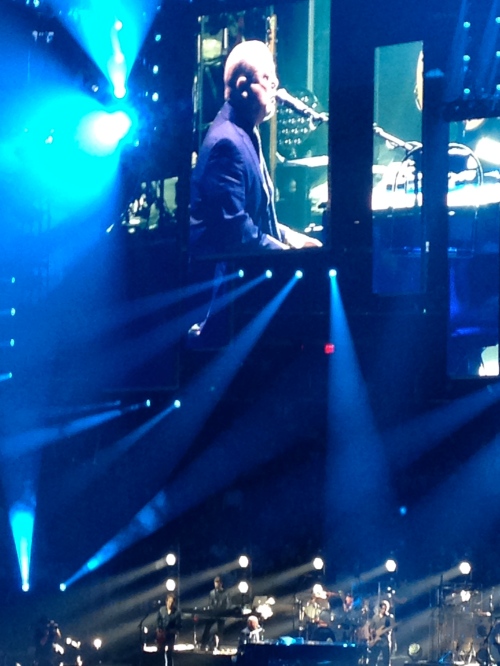 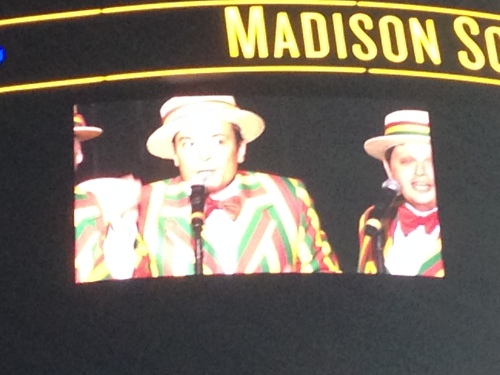 “I’m supposed to retire at this age… or at least not have the name ‘Billy!'” Joel joked.

It’s pretty impressive to be commanding a stage for two solid hours at 65, but he’s no Springsteen. He was clearly sweaty and winded, and that’s after mostly sitting at the piano all night. But he worked hard and he’s entitled to be tired! I hope I have that energy at 65.

He played everything you’d want to hear. It felt like all 18,000-plus people in the audience knew every word to most songs, which always elevates a concert from a performance to an emotional experience.

The crowd went particularly nuts during Scenes from an Italian Restaurant, Movin’ Out, and Piano Man.  I’m a sucker for a man in uniform, so when members of the NYPD and NYFD came out during Goodnight Saigon, goosebumps were abundant.

Billy Joel will be at MSG once a month from now through December.  I loved the show so much, I’d see it again in a heartbeat, but the ticket price is definitely a deterrent. While the face value of the tickets starts at $150, decent seats are a minimum of $300 and seats on the floor range from $700-$1300.

But who knows how many more chances you’ll have to relive your youth and see a master at work, having the time of his life. Joel said several times during the show that he loved his job. One of the benefits of growing old with your music idols is seeing them mellow and really appreciate their fans.

Our group of friends belted out the lyrics, danced in the aisles, and tangled our arms as we swayed to every tune.  It’s funny how seeing someone old made me feel so young.

What music takes you back? Tell me in the comments.

3 responses to “Billy Joel at MSG: the nostalgia’s worth the ticket price”