Frustrations of a soccer mom

My boys  (13, 10, and 7)  are good athletes and love to play sports.  My older boys have played on travel soccer and baseball teams for many years so we are versed in the politics and turmoil of team sports. As the level of play increases, so does the intensity of the kids and parents.

As I’ve mentioned before, I’m a fan of my kids but not a sports fan, and hardly an athlete. I don’t share the same vested interest and passion of many of the families we encounter. No one is more fervent about sports than Wilson, but– to his credit– he’s able to remain extremely calm and reasonable when it comes to our boys’ athletic endeavors.  He cares about winning more than he admits, but at the end of the day, he wants them to improve their skills and enjoy playing more than anything else. 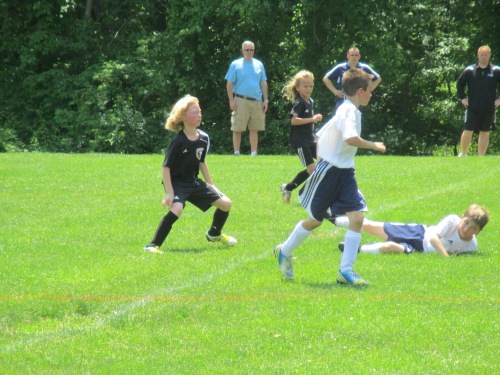 We were disappointed and frustrated by the way the team organizers mishandled the process and communication involving several kids, not just mine. We honestly didn’t care as much about the level of play Aden would experience on the new team, as much as that all of his close friends remained on his old team.

Aden’s first reaction was to quit. Soccer isn’t his favorite sport, but he’s fast and aggressive and has good instincts and skills.  We’ve been told by many parents and coaches that he’s a good player so it seemed imprudent to stop playing a sport in which he had potential to excel.

We also didn’t like the idea of letting him quit when things got hard. After much coaxing, conversation, and a push from his influential big brother, Aden agreed to play on the new team.

While he did well on the field, we had a rough time getting him excited about playing soccer.  I was proud of the way he soldiered on all fall, accepting new coaches and missing his friends to goof around with at practice. But by the spring, he was done.

He didn’t enjoy going to practice and didn’t even care much about the games. We told him he had committed to his team and could not quit in the middle of the year. We also suggested that if he worked hard, he could probably play on the team with his friends again next year, which motivated him to continue.

He played hard in games, and only missed a few practices. Although he dreaded going, I felt okay pushing him because when he came off the field he was always invigorated and confessed he had fun.

When tryouts began a few weeks ago for next year’s team, I was nervous. My hope was that he made whatever team would get him to love the sport again.

As it turns out, at least 7 boys from his old team– including most of his friends– and several kids from his newer team have decided to play for various club teams in other towns, which they say offer better training.  There were once 3 teams for his age group, but the program imploded and now there’s only one. 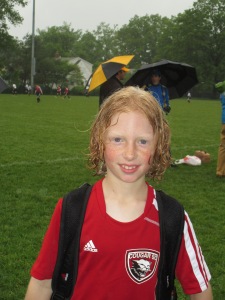 Aden not playing soccer will make my life a lot easier: less scheduling issues, carpools, and equipment. I’ll have more time on the weekends and won’t have to  argue with him about going to practice.  He’ll have more play dates and down time. He could even expand his horizons and take on an instrument, which we’ve wanted to try.

So why am I so disappointed?

It’s difficult to watch your child give up something he’s good at. I’m not big on quitting, and it just seems like a waste. I hope he doesn’t regret the choice later, when it may be too late to catch up.

I know it’s probably time to hang up his cleats. This could be a turning point in his life when he discovers something he enjoys more than soccer.

Both Wilson and I tend to agonize over decisions– many smaller than this one.  I can drive myself crazy with uncertainty and fear of remorse. But Aden has always been his own person, rarely influenced by people or drama around him. I envy that.

Quitting soccer was not a difficult choice for him. He’s already moved on. I guess I just have to catch up.

One response to “Frustrations of a soccer mom”