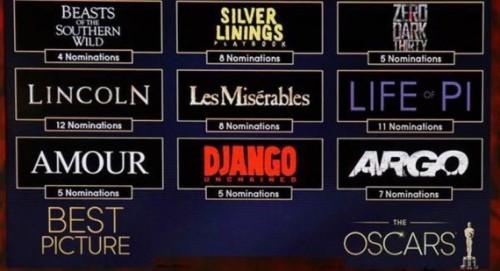 The Academy hasn’t been able to nail a good host for a while, so the show has lost some cache, but I’m still a sucker for every over-coiffed red carpet turn, every meticulously planned acceptance speech.

I don’t watch any of Seth MacFarlane‘s shows nor did I see his movie “Ted,” although I’ve heard it’s hilarious. I was also unimpressed with his “SNL” hosting effort, so didn’t see the logic in choosing him as Oscar host.

I didn’t like the open one bit. Didn’t find it funny, clever or compelling to watch. MacFarlane seemed nervous and awkward and his jokes fell flat. When William Shatner spoke to him from a screen above the stage about his performance, I was cringing. The song and dance numbers seemed out of place and poorly rehearsed.

Then two male choirs pranced around the stage singing an original song entitled, ”We saw your boobs,” and MacFarlane named all the famous actresses who’ve gone topless in movies. The shots bounced between the live performance and pre-taped cheesy reactions from some of the actresses.  I was uncomfortable, and wondered if he was offending half the room. His comedy seems misogynist and low brow. Will he get turned away from parties tonight?

The tribute to musical theater kicked ass. Loved Catherine Zeta Jones’s “All That Jazz” number from “Chicago”—sexy, spunky and raw. J Hud got a standing O when she rolled out her powerful “ I Am Telling You” from “Dreamgirls.” Then the whole cast of “Les Miz” –including Anne Hathaway, Hugh Jackman, Amanda Seyfried and the weakest link Russell Crowe— belted “One Day More,” giving me chills and renewing my desire to see the movie.

The tribute to James Bond movies could have been so much better. Why not bring out all the old Bond girls in fabulous Bob Mackie gowns…instead of having a very old singer performing “Goldfinger,” which is too old to be relevant?

—Michelle Obama (in a gorgeous metallic tank dress) live from The White House introduced the best picture award. Not sure why, but a nice surprise.

—Daniel Day Lewis won for best actor for “Lincoln,” becoming the first actor to win 3 Oscars in that category. He’s no joke.

Naomi Watts – My favorite by far.  Silver metallic asymmetrical Armani gown had inventive shape and lines and hugged her in all the right places. Stunning.

Jennifer Aniston— One of the few with a pop of color. Looked beautiful in a red classic Valentino ball gown and simple diamonds, with her gorgeous, perfectly highlighted tresses cascading onto her yoga-toned shoulders. (I may have a girl crush.)

Halle Berry – She was channeling Alexis Carrington in her 80’s-inspired black and silver striped Versace sheath, with major shoulder pads. But her skin, and body are perfection so she can pull anything off.

Sandra Bullock—She looked like a movie star in her black sparkly, Elie Saab beaded dress. The long straight hair, pulled back on one side with a diamond clip? I dug it.

Eddie Redmayne (from Les Miz) –gets my best dressed man award for his classic, fitted tux and unfussy hair.

Joseph Gordon Levitt– is adorable and looked cool in his modern, fitted tux.

Daniel Day Lewis—would not expect him to care about fashion yet I loved his navy tux. Different, handsome, unpretentious. 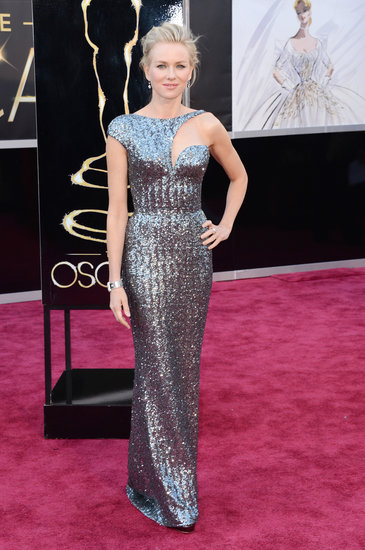 Favorite moment of the night:

Anne Hathaway’s nips– Poor earnest Annie. All that Oscar love (she won for best supporting actress) and so much public hate. Twitter was  on fire when she showed up  in a pale pink Prada gown that seemed rather plain, until I noticed her girls were standing at attention. Within minutes there was a Twitter parody feed: @Annesheadlights but by the end of the show it had been suspended. But the hashtag #AnneHathawaysNipples was going strong.

–When accepting her best actress award, Jennifer Lawrence fell up the stairs in her grand ball gown. She recovered quickly and gave a speech that was heartfelt, poised, and gracious, especially considering she was favored to win.

—Bradley Cooper is one of the sexiest men in Hollywood, but he overdid it on the hair gel and looked like he was wearing a helmet.

—Hugh Jackman’s wife, Deborra  had a great idea with the all black tuxedo pants suit but she didn’t quite pull it off, especially with the high ponytail. Almost, but not quite.

—Brandi Glanville. Not sure how this Real Housewife got into the Oscars but I’m always happy to see her. She actually almost had it. A gorgeous woman with an unbelievable body, her hair, makeup, and shoes were on target, but the dress bodice was straight out of a Playboy centerfold pictorial.   Oops. (you can see it here)

—Helena Bonham Carter  never disappoints. Her dress looked like a witchy costume and her hair was a mess. At least she’s consistent!

–Olivia Munn— Love her, hated the dress. Too much material on the bottom, color was jarring and hair too severe. Not flattering.

–Robert Deniro is so over the Oscars he didn’t even comb his hair.

Overall, the musical performances outshone any of the comedy or movie bits in the show and saved it from being totally boring. I much prefer the Golden Globes: better hosts, better speeches, looser crowd.

What did you think of the show and the fashion? Tell me in the comments.