My kids are hounding me for a dog

Our family was dog-sitting this week for Wilson’s brother’s dog, an adorable mutt named Ranger.  (When he was a puppy, he had black spots around his eyes that looked like the Lone Ranger’s mask.) We’ve taken care of Ranger before, but each time,  the pressure intensifies to get a dog of our own.

I like dogs and know that it would enrich my kids’ lives if they had a pooch, but I didn’t grow up with one. My mother dislikes and fears most animals and my father chose not to fight that battle. Wilson didn’t grow up with animals either so we’re clueless and intimidated by the idea of adding a dog to our family.

My middle son, 9-year-old Aden, is my most challenging child. He acts tough, but can be sensitive and moody.  But he loves animals. Every book he has taken out of the library since kindergarten has been about animals.  When we visit friends, he gravitates towards dogs more than other kids. He instinctively knows how to talk to them, pet them, love them.

I’ve resisted getting a dog because my youngest, 7-year-old Eli, was still having accidents until about a year ago. After 12 consistent years of changing diapers and throwing away stained Batman undies,  I wanted at least one poop-free year. 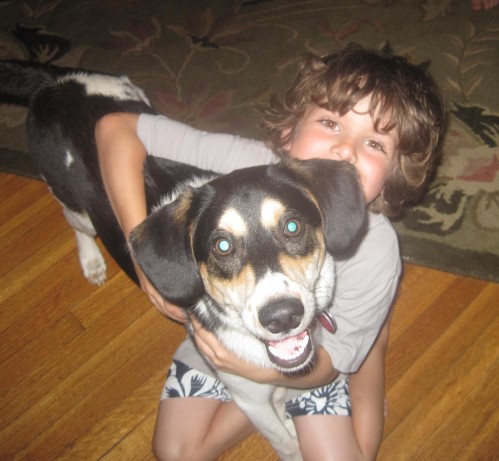 Many of our friends have gotten dogs in the last few years. I’ve seen their adorable, floppy puppies attracting the attention of excited kids and swooning adults and felt the pang of desire.

Our Fido-loving friends can’t imagine their lives without them and I’ve seen them treat their dogs with the same concern and adoration (sometimes more) that they have for their kids. It’s sweet.

It also scares the crap out of me.

I think about the long walks in the freezing cold, the chewed up furniture and toys, and the neediness of a puppy in its first six months.

I have three energetic boys who don’t listen to a word I say and a husband to whom I don’t pay nearly enough attention. I work part-time in the city and part-time at home and I have several volunteer and house obligations.  Do I really want yet another living creature depending on me?

The kids say they’ll help with the responsibilities and I believe they want to. But the reality is I’ll be the main caretaker of the dog. The only way I would get a dog would be if we had a trainer or obedience classes because we don’t know the first thing about food, schedules, or behavior. But that’s more time and energy.

Aden and Eli walked Ranger many times this week and played with him a lot. But when the novelty wears off, will I be nagging them to take the dog out like I do to clean their rooms?

I loved the infancy and baby stage of parenthood so taking care of a puppy and being needed in that way is appealing to me. But I know there will be plenty of times I won’t feel like standing on the sidewalk for the thousandth time in 20- degree weather waiting for it to take a leak…or coming home early from a party because it’s been alone in the house too long…or worrying about it when it’s sick.

Ranger is over a year old but still pooped in our front hall at least 6 times this week and peed inside twice. I’m sure part of it is different surroundings and missing his own family, but sometimes dogs just poop on the rug.

I’m not so psyched about that.

While I would love to rescue a dog, Eli has allergies so we need a non shedding pup. With the wide range of breeds out there, I’ll need to do ample research to  choose the right dog for our family.

It sounds like I’m hesitating as I voice my anxiety, but I know it’s not a matter of if, but when for us. When I see Aden cuddling on the couch with Ranger I know he needs a dog. He’s actually better behaved and more relaxed with a dog around.

He’s one of those kids who feels things deeply but can’t communicate his needs. Being around animals brings out his best self and perhaps makes him feel an unconditional love and understanding he may not feel from humans, even the ones who love him most.

How can I deny him something that would be such a positive influence?

I’m sure all you dog lovers will say just do it! Anyone want to share stories about the challenges? What breeds would you recommend? Please educate and encourage me in the comments.

This entry was posted in Modern Life, Puppy Tales and tagged getting new puppy, how to choose puppy breeds, kids helping with dog duties, kids responsible for dog, training new puppy, when to get a family dog, worried about getting dog. Bookmark the permalink.

10 responses to “My kids are hounding me for a dog”