Before kids we used to see movies all the time, sometimes two a weekend. We knew all the best theaters and when to go to get good seats. Names of actors and directors rolled off my tongue as easily as remembering family members.

But who has time for movies now?

I wish I did. It’s still one of one of my favorite activities. There’s something about sitting in the dark, scarfing down popcorn, while getting lost in a story that never gets old.

This weekend I was determined to see a flick.  When we arrived at the theater, the timing worked for a movie I knew nothing about called “The Paper Boy.” 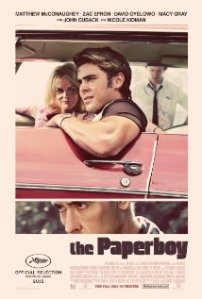 Wilson and I loved it. It’s the FX show “Justified” meets “Cape Fear” meets “Body Heat.” Set in a Florida swamp town in the 1960’s, it’s the story of two brothers who only have each other and the maid who raised them after their mother left. The older brother (McConaughey) is a newspaper reporter who’s investigating whether a convicted murderer (Cusack) was framed for a crime he didn’t commit . Kidman plays the sexy fiance of the convict who has a stake in freeing her man.

The plot is compelling and unpredictable. It’s incredibly sexy and violent, but only briefly disturbing.  The acting is amazing, especially Efron who is scantily clad in most of the movie (which was just fine with me) but completely believable as the younger brother who comes of age as life kicks him in the gut more than once. Macy Gray plays the quietly wise maid who brought the boys up and has to balance playing surrogate mother and employee in the racist South.

I was distracted at first by Kidman’s over plumped lips– they seemed too modern for the 60’s waitress she plays– but she is so good in the movie, you forget about it and get lost in her character, who manages to be vulnerable and strong all at once.

“The Paper Boy” is directed by Lee Daniels who’s been a critical darling for  “Precious.” His talent is getting raw, intense performances out of actors and this movie is no exception.  McConaughey is grimy and reckless throughout, and Cusack is downright repulsive and terrifying.

I smell Oscar nods all around.

Daniels is also creative in his shots and editing, which messes with time and leaves the viewer wondering if all of the scenes were real or partly the character’s dream.  A small South Florida town in the Civil Rights era is an interesting backdrop to the plot and the relationships between the black and white characters are complicated but authentic.

I would highly recommend”The Paper Boy.”  I’d also suggest you see the movie before dinner as it will provide plenty of conversation.

Shoot me your movie tips in the comments.

One response to “The Paper Boy Delivers”