I knew today was September 11th but I got the kids up and off to school like it was any other day. But when I returned from the bus stop, the TV was on and the victims’ relatives were reading the names of those they lost on that horrific day 11 years ago.

I was weeping within minutes. Even for the tenth time, hearing the names breaks my heart and brings me right back to that Manhattan day. It was a gorgeous, crisp autumn morning and the sky was remarkably clear and blue, before it exploded into fire and smoke and misery.

I was working at Fox News and basically lived at my desk for a week trying to tell the most shocking, tragic, and intense story of our lives. When I was able to get out of the office to catch a few hours of sleep, I could smell the ash and smoke in the air and saw the glazed, damaged looks of my fellow New Yorkers.

I remember seeing the “missing” flyers posted all over the city, and making trips to CVS to get contact lens solution, wipes, rubber gloves to bring to our local fire house to feel like we were doing something to help.

There are so many stories about the thousands of people touched by the attack. For the 10th anniversary, I wrote a series of articles for AOL’s Patch.com. I interviewed a New Jersey man who lost his brother-in-law and was so moved by the experience that when he retired a few years later, he started a fund to support people in crisis in his local community and support cultural events that bring people together. You can read about TJ Hargrave– who was at his office at Cantor Fitzgerald when he died– and his brother-in-law’s inspiring story  here.   One of TJ’s daughters read his name this morning at the World Trade Center Memorial. I’m sure he would be so proud of her courage.

I also had the opportunity to interview several New Jersey firefighters last year — some of whom filled in at a Brooklyn fire house in the days following the attack. They tell a compelling tale with some chilling details about their experience in New York and what it’s like for them and their families to face risk every day. That story is here.

I always feel helpless when watching the families of 9/11 victims grieving. But reading these stories is a way to keep the memories of those we lost– and those who risked their lives to help– alive. One thing we can do is never forget. 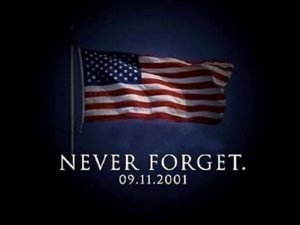